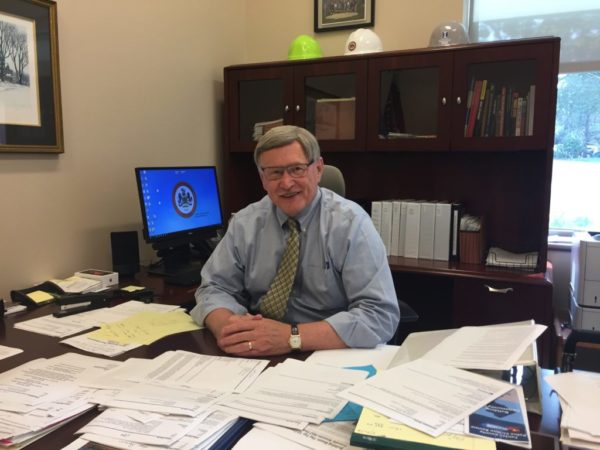 (Updated at 10:50 a.m.) As neighbors, McLean and Tysons couldn’t be more different. The former has a reputation as a quiet, suburban town with a long history and deep community roots, while the latter is a comparatively young and bustling pseudo-city in its own right.

But what happens in one will have a profound impact on the other, and Fairfax County Supervisor John Foust, who represents McLean, said that has become particularly clear with regards to regional traffic.

“Our plans say that Tysons development will be limited to Tysons and that the neighborhoods should be protected,” said Foust, “but the traffic that goes there goes through McLean and it has gotten worse.”

In discussions with members with the McLean Citizens Association, traffic was almost universally one of the most discussed items. The impact of the growing Tysons can already be felt in McLean, where both highways and residential streets are becoming increasingly clogged with commuter traffic. One of the big problems, on both a county and inter-state level, is the American Legion Bridge.

An average of 239,000 people use the American Legion Bridge every workday, according to a letter sent from the Fairfax Board of Supervisors to the Maryland Department of Transportation.

“The bridge is grossly over capacity,” said Foust. “It’s the responsibility of Maryland now. We’ve been encouraging them to expand… expansion would be a huge difference.”

Maryland has previously announced a $9 billion investment in reducing traffic congestion, including adding toll lanes north of the bridge, but the bridge itself remains a roadblock for commuter traffic heading to or from Tysons and McLean.

But expanding, supplementing, or replacing the bridge all come with difficulties. VDOT engineers have said that the bridge cannot be expanded and that it has reached capacity. Adding a new bridge to the site would also be difficult, if not impossible, given the low-density zoning in the area aimed at protecting the Potomac River. Fully replacing the bridge is a popular suggestion, but one that could take decades of planning, environmental, and financial work.

In the meantime, Foust said that traffic improvement projects in Tysons, like the Jones Branch Extension currently underway, will also help regional traffic flow. The new extension should take some pressure Route 123 and hopefully reduce congestion in McLean.

Ultimately, Foust said Tysons and McLean are going to need to rely on non-car transportation to help take some of the pressure off local roads. But paradoxically a lack of car-supporting infrastructure, at McLean Station on the Silver Line especially, makes that difficult.

“There’s a lack of parking at the stations here,” said Foust. “There’s no plan in place to build a lot [at McLean Station]. It’s very inconvenient. Generally, the Board does not want to encourage more traffic to drive into Tysons, but that means my constitutes can’t utilize the Metro.”

Foust said the County is working on expanding bus transportation, but that it will take a long time to get that to a convenient level. Given the growing pressure of traffic coming in and out of Tysons, it’s time McLean may not have.