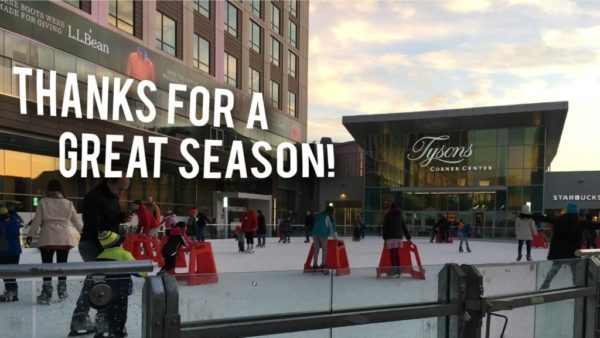 (Updated 12:20 p.m.) Tysons Corner Center’s ice skating rink will not be making a return to the mall this year.

“We are not having the ice rink this year,” said an employee in the mall’s management office. “I don’t know if there will be one somewhere else, but it will not be on mall property.”

A call to the rink’s phone number reaches a voicemail box thanking guests for a successful 2017-2018 season and saying the rink would return in November, which is no longer the case, we’re told.

The rink has been an annual winter activity at the mall for the fast few years, after its debut in 2015. It was even the site of a marriage proposal in 2016.

Becca Willcox, events and communications manager for Tysons Corner Center, confirmed that the rink would not be returning. Willcox said unpredictable weather and wind made it difficult to keep the rink open for a full season.

If you’re looking for other ice skating rinks in the area though, Tysons Reporter has you covered.