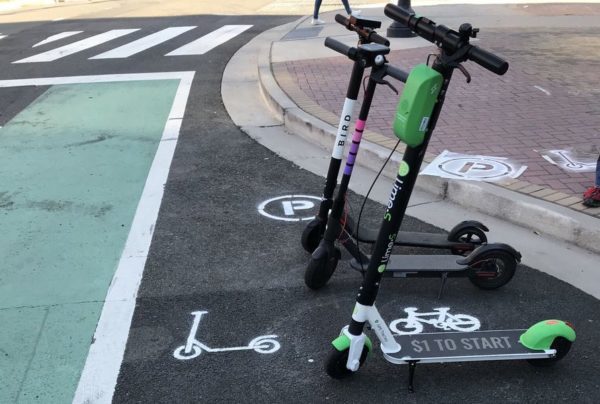 The City of Falls Church is looking to implement a pilot program for scooters as a deadline nears for scooter regulation.

Legislation passed during the General Assembly session in January allows localities to regulate scooters and motorized skateboards, however, the localities have until Jan. 1, 2020 to take action to implement any regulations. After that date, the scooter companies can zoom around as they see fit.

Scooters, an increasingly popular alternative transportation option, are already around the area.

The City Council is set to discuss the proposed pilot program, which would allow the city to regulate bicycles and motorized skateboards, scooters and bicycles for hire, at a work session tonight (Tuesday).

Additionally, the city would cap the maximum number of devices to 25 per company, allowing the company to increase the number with extra permit fees. Each company would have to pay a permit fee of $100 per device.

The proposed pilot program is set to go before the City Council for a review on Sept. 23 ahead of a planned adoption in October or November.

“The ultimate goal is to provide an adequate and safe walkway system and for the city to ultimately achieve ‘Walk Friendly Community’ designation,” City Manager Wyatt Shields wrote in a memo to the mayor.

City staff chose several projects recommended by the Citizens Advisory Committee on Transportation totaling $100,000 — the amount set aside in the FY 2020 city budget for short-term spot improvements for pedestrian safety.

One project costing $45,000 would install a new sidewalk at S. Oak Street near Seaton Lane to close an 80-foot “missing link” along the busy corridor near TJ Elementary School.

The staff also recommended a $40,000 improvement that would install a new sidewalk at 304 S. Maple Avenue, closing a 60-foot gap in the sidewalk.

Finally, the staff plan to use $15,000 to install handicap-accessible ramps at locations that need them.

Some of the projects identified by the Citizens Advisory Committee on Transportation didn’t fit the city’s budget, like removing utility pole obstacles. 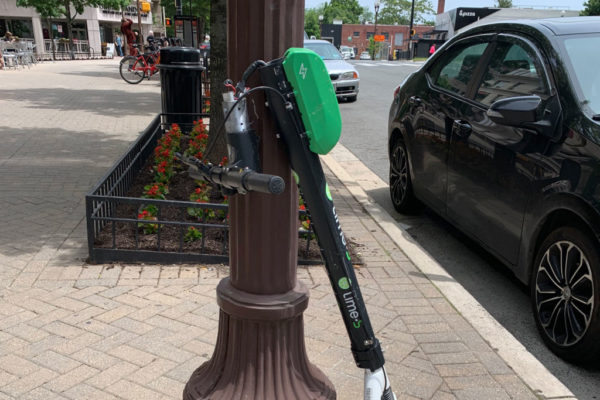 The Fairfax County Board of Supervisors is working to create a scooter program before scooter companies are allowed to zoom around however they please starting next year.

Legislation passed during the General Assembly session in February allows localities to regulate scooters and motorized skateboards, however, the localities have until Jan. 1, 2020 to take action to implement any regulations. After that date, the scooter companies can operate locally as they see fit.

Dranesville District Supervisor John Foust said there is a “sense of urgency” to create scooter rules on the county level.

“[The county has] to have an ordinance in by the end of this year or it becomes the wild, wild west,” Foust said.

Scooters, an increasingly popular alternative transportation option, are already in use in the county.

Chris Wells, the bicycle and pedestrian program manager for FCDOT, said that companies see scooters as an attractive form of alternative transportation.

County staff suggested that proposed scooter program limit each company to 250 scooters, set the speed limit at 15 miles per hour and not restrict the devices to specific geographical areas of the county, according to the presentation.

Foust raised concerns about the 15 mph speed limit — “To me, it’s too fast” — and requested a demonstration.

The program would be regulated by the Department of Cable and Consumer Services.

When creating the proposal, county staff reviewed ordinances and pilot programs in nearby jurisdictions like Arlington, the City of Fairfax, the City of Alexandria and D.C., partly to possibly provide consistency around the area.

“The research is showing these are a type of transportation device used by a more diverse population,” Wells said, adding that “Tysons and Reston would be a great place for scooters to fit into the infrastructure.”

Overall, the board voiced support for the proposal.

Lee District Supervisor Jeff McKay said he supports the program as a traffic calming tactic, although he said that “scooters are probably floating around somewhere” after major flash flooding earlier this week.

“It does send a message that we are a county that is trying to promote transportation,” McKay said.

“I’m supportive of what’s on the table,” Chairman Sharon Bulova said, adding that the board can always amend an ordinance. “I think what staff is proposing sounds like a good way to get us started.”

The Vienna Town Council is entering the first stages of a process to bring electric scooters and dockless bicycles to town.

According to staff at a Town Council work session on Monday, June 10, a potentially shared mobility pilot would include both electric bicycles and scooters as “self-propelled vehicles,” but more still needs to be determined.

For starters, where will people ride electric scooters in Vienna? Council members expressed concerns about having them either on Maple Avenue or the adjoining sidewalks, which are typically only 5 feet wide and include planter boxes that narrow the sidewalks considerably. But elected officials seemed equally concerned about the prospect of having electric scooters complicating the already notoriously dangerous and congested Maple Avenue.

Both staff and officials expressed some misgivings and frustrations with the prospect of bringing in electric scooters. Staff said that a story had come out this year that Lime Scooters would be coming to Fairfax City and Vienna, prompting a tense series of phone calls from Fairfax and Vienna staff advising Lime that they had not gone through the proper approval process.

Planning Commissioner Mary McCullough also referenced a Washington Post story that only 7 percent of regional residents reported using e-scooters as their preference for getting from one place to another.

The next step for the scooter approval process is a work session planned for sometime in the fall, which the Town Council said will likely include meeting with the Transportation Commission.