Vienna Police Warn of “McAfee Antivirus” Scam — “The scam usually begins with an email that purports to be from McAfee informing citizens that they are being charged $300 for ‘McAfee Total Protection anti-virus software’ unless they cancel the order by calling a phone number provided in the email. If you call the number provided, you will be greeted by a scammer posing as a McAfee employee who will ask for personal information, including a bank account number supposedly to verify the account.” [Vienna Police Department/Twitter]

New Tysons Gym Opens Today — PureGym has a grand opening today (Thursday) for its new Tysons Square gym, the British company’s first in the U.S. PureGym says Tysons stood out for “its mix of office and residential, as well as its accessibility by car, bus and rail via Metro’s Greensboro station.” [Washington Business Journal]

Park Authority Board Reverts to Virtual Meetings — “The Fairfax County Park Authority Board’s regular meetings and committee sessions will return to a virtual format until further notice. Meetings will be accessible via livestream beginning Wednesday, Jan. 12, 2022. This change is reflective of current social distancing recommendations and safety concerns related to the current surge in COVID-19 cases.” [FCPA]

Tysons Nail Salon Relocates to Reston — “Beauty Nail Bar, currently operating out of Tysons, should open at its new location (1675 Reston Parkway) by the end of February, according to owner Nam Huynh of Wolf Trap. He said he decided to move his operation for more space, but it will otherwise be exactly the same.” [Reston Now]

Virginia-based Starr Hill Brewery announced today (Wednesday) that it will be nesting in The Perch, the skypark atop Capital One Hall in Tysons.

The brewery will lease a biergarten space with more than 5,000 square feet within the 1.2-acre skypark, which is expected to open this summer. Visitors will have access to an outdoor dining and lounge space as well as an amphitheater with lawn seating, which will offer live entertainment managed by Starr Hill.

Starr Hill will serve a biergarten-themed menu and stock a full bar highlighting its beers.

“We couldn’t be more excited to be a part of the growing development around the Capital One Center,” Starr Hill Vice President of Finance and Retail Josh Cromwell said. “The Perch is such a unique space and when we were approached about bringing to life a rooftop biergarten and amphitheater concept, we couldn’t turn it down. There will be tremendous energy at Capital One Center and we’re proud to bring Starr Hill into the D.C. metro area.”

Headquartered in Crozet, Virginia, Starr Hill has four locations in Richmond, Roanoke, Lynchburg and Charlottesville. The independent, regional craft brewery has won numerous awards in the U.S. and abroad.

“Capital One Center is thrilled to welcome one of the most-recognized breweries in Virginia, Starr Hill, to The Perch,” Capital One Center Managing Director Jonathan Griffith said. “Starr Hill’s brand and reputation within the craft beer community, as well as their experience in the live music scene, will further establish The Perch as a unique destination for Tysons and the Greater Washington region.”

In addition to the Starr Hill Biergarten, The Perch will feature food trucks, a games plaza, a sculpture garden and a dog park. The skypark is situated above Capital One Hall, a corporate and performing arts center set to open this fall, and adjacent to the Watermark Hotel, Capital One’s corporate lodging facility, opening in late 2021.

Starr Hill is not the only retailer to recently announce it would be setting up shop in the 6 million square-foot Capital One Center in Tysons.

Reston Skylines first reported earlier this month that the boutique nail salon and spa Nothing in Between Studio will be moving into the ground floor of Capital One Center.

NIB Studio confirmed the news to Tysons Reporter. This location marks an expansion for the salon, which also has a studio at 6410 Arlington Blvd in Falls Church.

An opening date has yet to be announced, Capital One Center Manager of Marketing and Community Affairs Meghan Trossen says.

“Right now we have no other leases to announce,” she said.

Reston Skylines also reported that City Tap House, which has seven locations, including one in Loudoun, would be coming to Capital One Center. However, the brewery told Tysons Reporter that it does not have plans to set up shop in Tysons. 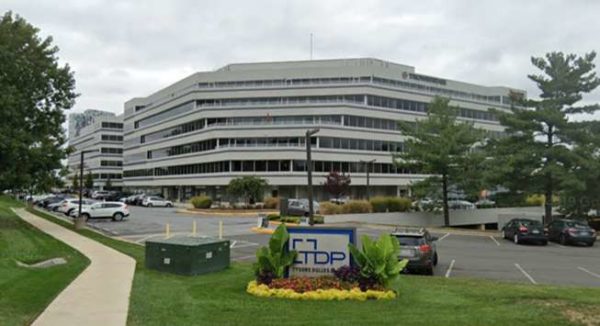 The hair salon KLS Studios is moving to the Tysons area.

Tysons Reporter’s affiliate site, Reston Now, reported yesterday that the salon had closed its existing venue at the North Point Village Center on Jan. 30. It is currently operating out of Spa Noa in Reston on a temporary basis.

Co-owner Stephanie Gardiner Stout confirmed to Tysons Reporter that KLS Studios has found a new home at Tysons Dulles Plaza on 1430 Spring Hill Road in McLean. It will be located in Suite 100.

“We moved because we wanted to be in a more urban environment,” Gardiner said.

Gardiner co-founded KLS Studios in 2010 with Karen Grimm. They envisioned having a salon managed and operated by its senior staff, who would also serve as mentors for other members of its hair team.

Describing KLS as “a color specialist salon more than anything,” Gardiner says the new salon will be a more industrial, high-tech space than the previous venue in Reston.

According to property owner CBRE, the suite is 1,671 square feet in size and can be found on the ground floor of the Tysons Dulles Plaza building, which also counts Orangetheory Fitness among its tenants.

Some permits are still pending, but the KLS Studios team anticipates opening the new McLean location in early or mid-March, Gardiner says. 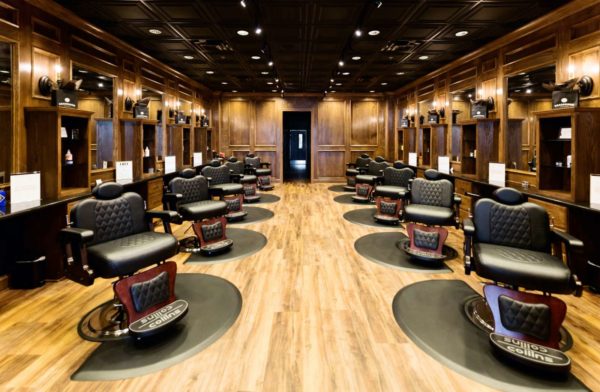 This location marks Boardroom Salon’s debut in the D.C. area. The salon got its start in 2004 in Southlake, Texas, and has since expanded to 42 locations across the U.S. Its co-founders — husband-and-wife duo Bruce and Heather Schultz — plan to continue growing this year.

“The Mosaic District brings a distinct community atmosphere to Northern Virginians looking for upscale retail, residential, restaurant and entertainment offerings,” Boardroom Salon Fairfax Manager Nicole Morales said in a statement. “We look forward to introducing Boardroom with our professional talented stylists and barbers to clients who want an elevated grooming experience in a sophisticated yet still approachable way.”

For COVID-19 safety, team members wear masks and gloves and take their temperatures before each shift.

Clients can purchase one-month, six-month, or annual memberships, which provide unlimited haircut services and a 10% discount on all products and services, as well as complimentary referral Benchmark haircuts to give to friends and family.

Memberships are honored at all Boardroom locations, which can also be found in Arizona, Georgia, Oklahoma, Tennessee, and Texas. The salon is also planning to open a venue in Maryland. 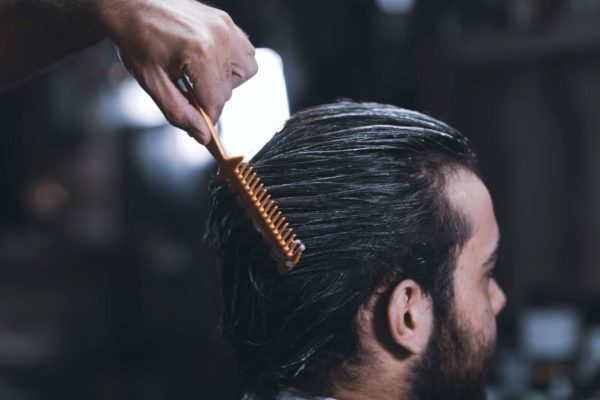 COVID-19 prompted restrictions on personal grooming services for two months. Now with Virginia progressing with its phased reopening plan, people can get their hair cut or nails done professionally.

Today, Fairfax County entered the second phase of the reopening plan. Personal grooming services that have reopened are still by appointment-only under the Phase Two guidelines.

Personal care services were first allowed to reopen in the county on May 29. Currently, customers and employees must wear face coverings, and the businesses are limited to 50% capacity.

Let us know in the poll below if you’ve been to a salon, barber, spa, tanning salon and/or tattoo shop since the rollback started on the COVID-19 restrictions. If you have any interesting stories about haircuts at home, let us know in the comments section. 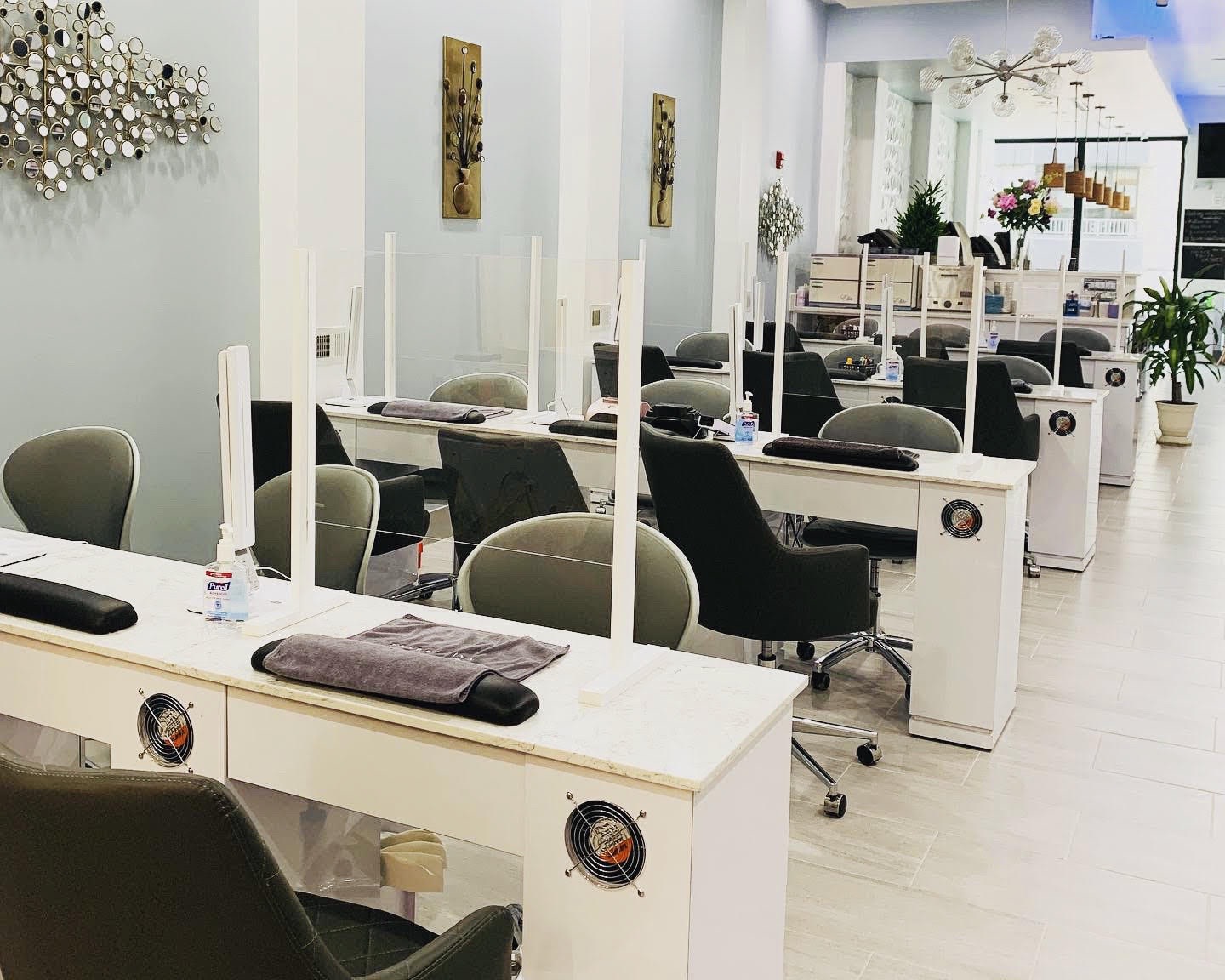 As businesses around Tysons reopen after being shut down for coronavirus concerns, personal care services such as nail salons are making customer and employee safety protocols their top priority.

Tysons Nail Lounge has reopened for business following Northern Virginia’s transition into Phase 1 of reopening on Friday, May 29. The nail salon located in The Boro is taking customers by appointment only.

“We’ve been pretty impacted by the shutdown because we’re a personal-care business,” said Emily Tran, the owner of Tysons Nail Salon. “Since we opened, business has picked up a lot. Customers feel safe.”

While most of Virginia reopened on May 15, localities in Northern Virginia requested extra time “to meet the health metrics,” according to Gov. Ralph Northam. After granting the delay, Northern Virginia finally entered Phase 1 on Friday. Previously, Virginia had been under a stay-at-home order since March 30 due to the coronavirus and is now under a safer-at-home directive.

Tysons Nail Lounge is taking precautions to make sure their customers feel safe. Customers are required to wear masks — if they don’t own one, the salon will provide disposable masks, according to Tran.

Additionally, the salon is taking customer temperatures at the door with a no-touch thermometer while also requiring their employees to take their temperature prior to each shift. Plexiglass sneeze guards have been installed at each station and are designed with a slot for customers to slide their hands through.

“Our goal is to keep customers and staff healthy with maximum sanitation and disinfection procedures. We are taking necessary precautions so customers feel safe,” said Tran.

Tysons Nail Lounge is a relatively new business. The salon made its grand opening in January of this year after a few months of delays from their original opening that was slated for November 2019. Their services include manicure and pedicure services, waxing, massages and more, according to their website, which also provides an extensive breakdown of how they plan to keep their patrons safe.

“We are very happy we’re open again. Customers have been in quarantine for a while and are more than joyful that we’re open,” Tran said. “We’re prepared, and we’re definitely ready to take on customer demands.” 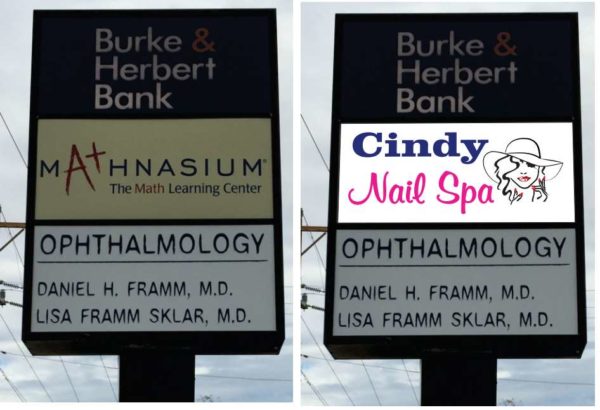 A nail salon in Vienna will soon move into a new home.

Cindy Nail Spa is currently located at 338 Maple Avenue W. and plans to relocate to an adjacent building that houses Burke & Herbert Bank, according to a Town of Vienna employee.

Thi Thai, the location’s owner, told Tysons Reporter that staff hopes to have the new salon up and running within two weeks.

The salon of nail services — from manicures to pedicures to gel fills — along with waxing for men and women, according to the salon’s website. 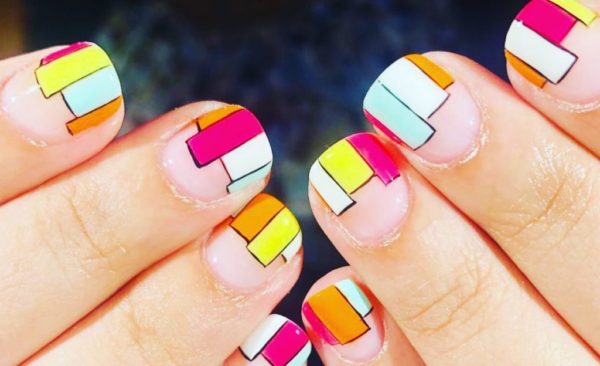 Tysons Nail Lounge is now open for business in The Boro after facing some delays.

“Customers can enjoy sipping on organic teas, coffee, or a glass of wine while getting serviced by one of our highly trained technicians,” Tran said.

Customers can a free manicure with any pedicure or get 20% off any service until Feb. 10 for the salon’s grand opening special. 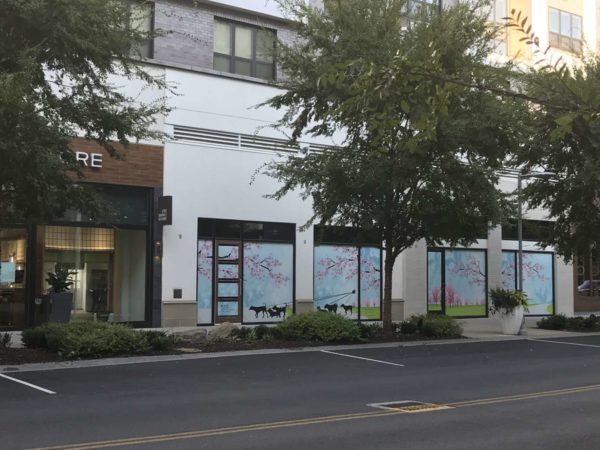 Boardroom Salon for Men plans to expand into the D.C. area with two stores — one of which will be located in the Mosaic District.

The men’s grooming company is looking to open at 2920 District Avenue, Suite 165  — next to Fair Trade Winds — in the spring, according to a press release.

“The sophisticated salon features wood paneling, a relaxing lounge with leather chairs and a great atmosphere,” the press release says.

Boardroom offers clients the opportunity to purchase three-month, six-month or annual memberships, which provides members the freedom of unlimited haircut services, plus 10 percent off all products and complimentary referral Benchmarks to giveaway. Memberships are honored at all Boardroom locations nationwide, making it convenient for frequent business travelers.

The other D.C. area location plans to open in Rockville, Md. in the spring.

The Boardroom first opened in 2004 and now has locations in Arizona, Georgia, Oklahoma, Tennessee and Texas, according to its website.

Sechoir is moving to a new spot — but it’s not far from where its currently located near the Dunn Loring-Merrifield Metro station.

The medical spa and hair salon is currently located at 2674D Avenir Place. Signs say that it is moving to 2672J Avenir Place.

Along that street, a Fairfax County permit indicates that iFix is coming to 2674E Avenir Place.