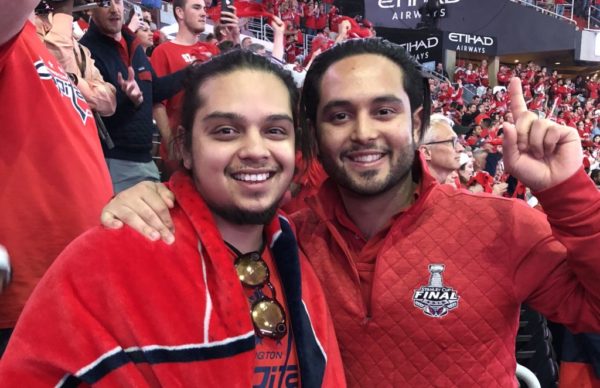 Two Vienna residents looking to simplify the way people buy and sell event tickets decided to start their own company.

Newly created TicketFam is an online platform that controls ticket distribution for events. Though still in the early startup phase of the company, co-founders and friends Ashik Banjade and Arian Shahbazi said that their main goal is to disrupt how people buy and sell tickets now.

The James Madison University graduates met while in college a few years back and launched their company eight months ago. Though they both have full-time jobs as IT consultants, they said they work on their company during their spare time.

“We’ll work with anyone — vendors, artists or stadiums,” Banjade told Tysons Reporter, adding that users can register on the platform and create an event page.

The platform functions by working with event organizers to create a seating or ticketing arrangement, promote events and special offers, analyze the target audience for the event for marketing purposes and allow attendees to purchase tickets from sellers, according to the company’s website.

On TicketFam’s website, tickets are only available for the upcoming act 25Band, which the production company booked. But the founders said they will be adding more ticket opportunities this week, including an event on Halloween.

Event attendees will be given a QR code upon checkout, the co-founders said.

“All of our payment processes are managed via Payment Card Industry-certified third parties, ensuring the checkout process is secure and regulated,”  Banjade said. In the future, the co-founders also want to accept cryptocurrency, PayPal and other forms of payment for tickets.

Soon, TicketFam will unveil a new user interface and features, including a rewards system and game, which Banjade and Shahbazi declined to provide more details on.

Within the next five years, the young entrepreneurs said they hope to catch the attention of competitors and maneuver into a position of power to challenge the status quo and become a main player in the ticket sales industry.

When it comes to costs for artists and event organizers, they do not have a set cost, Banjade said. Instead, they are competitive and will match the price of any competitor until they establish themselves in the ticket sales industry.

The Schar School of Policy and Government at George Mason University has been named No. 2 in the country in the 2019 U.S. News & World Report for its security studies programs.

If you dream of a career in international security, homeland security, emergency management or other fields that tackle “wicked problems” around the world, the Schar School has top-rated master’s degrees, graduate certificate programs and PhD programs to help you achieve your goals.

The Schar School is an important part of George Mason’s Research 1 Doctoral Universities rating as its faculty and students contribute research of consequence in fields including biodefense, homeland security, emergency management, global relations, war, elections, federalism, economics, energy and others.

Interested in one of the graduate degree programs at the Schar School?

Throughout the year, the Graduate Admissions Office offers the opportunity for prospective students to sit in on a graduate class taught by Schar School faculty members. Browse the visit options here.

(Updated at 8 a.m.) To the casual viewer, Pimmit Hills is a sleepy subdivision just southeast of Tysons quickly being overshadowed by its neighbor. But Pimmit Hills is a neighborhood with a surprising depth of history and one that played a central role in much of the region’s development.

In her new book, “Participation, Community and Public Policy in a Virginia Suburb“, Patricia Donahue, a policy fellow at George Mason University’s Schar School of Policy and Government, follows the neighborhood across sixty years of history.

On Nov. 10, the book was awarded the Ross Netherton Prize, a $1000 prize awarded for a work covering local history.

Donahue said the book started almost ten years ago when she was researching public policy impacts on small neighborhoods.

“I looked for a community in Northern Virginia that I thought was typical of a middle-income community in the post-war era,” said Donahue. “I thought it would be a simple case study, but it just kept unfolding into one fascinating story after another. It really told the story of suburbia in one community.”

Pimmit Hills was built as a subdivision in the 1950s for veterans of World War II and the Korean War. Though today it is dwarfed by nearby development, when it was first built it was the largest subdivision in Fairfax County by far; four or five times larger than any of the others.

When it was first built, the neighborhood was surrounded by farms and fields, but today it’s completely surrounded by highways and development. Donahue compared it to real estate holdouts in major cities.

Donahue said it was fascinating to follow the same community, and often same families, through the turbulent latter half of the 20th century through today.

“So much happened there,” said Donahue. “They dealt with desegregation, [growing] infrastructure, the baby boom… they were part of Fairfax transforming from a rural community into an urban one.”

Donahue said she stumbled on various extreme viewpoints from people who were essentially neighbors. The topic of segregation was one that had bitterly divided the community.

“There were people who supported massive resistance to desegregation, with residents who were very comfortable using language we find tough,” said Donahue. “But at the same time, in the same community, there were three ministers who made a public statement six months after the Montgomery bus boycott saying they totally rejected segregation and they wouldn’t let their churches support it. In one community, it’s a whole range of views. People risking their careers and people who were like ‘there’s no way we’re going to let this happen.'”

Beyond just segregation, Donahue said there were some horrific crimes throughout the neighborhood’s history as well. During the 1960s, Pimmit Hills was a pseudo-headquarters for The Pagans, a notorious motorcycle gang. In 1970, members of The Pagans kidnapped rival gang members, tortured them in Arlington, then murdered them in the forest near Pimmit Hills.

Pimmit Hills also played a surprising role in regional and national history. Donahue said Charles Lewis, one of the early presidents of the Pimmit Hills Citizens Association, was a researcher on the first American exploration of Antarctica. Frances Lanahan, a journalist and daughter of novelist F. Scott Fitzgerald, once wrote a profile of the neighborhood.

But one of the most notable moments for Pimmit Hills was in the early 1950s when Fairfax County signed up to be one of the first large-scale tests for Jonas Salk’s new polio vaccine. After gossip columnist Walter Winchell alleged that the polio vaccine would end up killing children, Donahue said many other communities yielded to concerns and pulled out of the tests. But given the high mortality rate of polio in Fairfax, Donahue said the county was the only community to stay in the program.

“Imagine the courage of those families who agreed when no one else would to have their children immunized,” said Donahue. “Second graders in Pimmit Hills were among the first in the nation to get the vaccine.”

“Like a lot of communities, they struggled with ‘hey, do we want development on our doorstep?'” said Donahue. “That’s still a struggle. Will they survive? I think they’re part of the change. If you drive through Pimmit Hills, every fourth or fifth house is a rebuild. They are changing it. I think they are not going to be bystanders in this change. They are going to be active agents in shaping that change.”

The book, which is intended for an academic audience, is currently listed at $89.98 on Amazon.