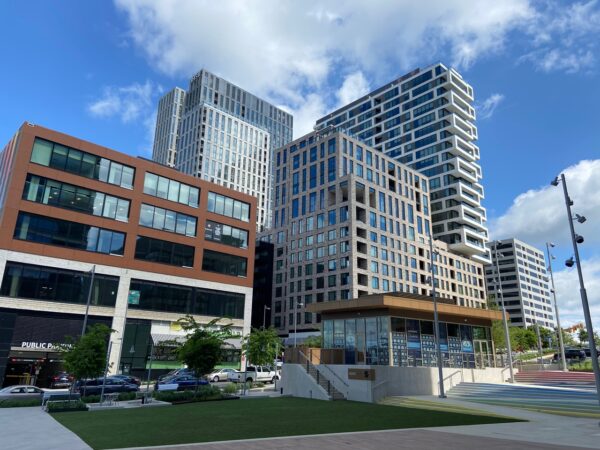 Wolf Trap Wireless Tower Plans Put on Hold — Fairfax County has paused negotiations with Milestone Communications on a special exception application for a 114-foot-tall monopole on the Wolf Trap Fire Station site. The proposal drew strong opposition from community members, who argued that the structure would be inappropriate for the surrounding residential neighborhoods. [Sun Gazette]

Tysons Pandemic Recovery Survey Deadline Extended — Tysons Partnership has extended the deadline for its survey to evaluate expectations for the area’s recovery from the COVID-19 pandemic to May 21. Previously scheduled to close on May 14, the survey asks about people’s interest in returning to offices, transit, dining, and other activities that were disrupted by the pandemic. [Tysons Partnership]

Vienna Animal Hospital Proposes Expansion — Veterinary Surgical Centers, which is located in Suite 100 in the basement of 124 Park Street SE, wants to expand to the first floor, where it would add neurology treatment, a new imaging center with a waiting room, exam and operating rooms, and other facilities. The Vienna Planning Commission will make a recommendation on the proposal at 7:30 p.m. on Wednesday (May 12). [Patch]

Clemyjontri Park Playground Named Best in Region — Virginia Living readers voted for Clemyjontri Park as the site of Northern Virginia’s best playground in the magazine’s “Best of Virginia 2021” competition. The McLean park’s unique playground was designed for children of all abilities, including kids who use wheelchairs, walkers, or braces and kids with developmental or sensory disabilities. [Fairfax County Park Authority] 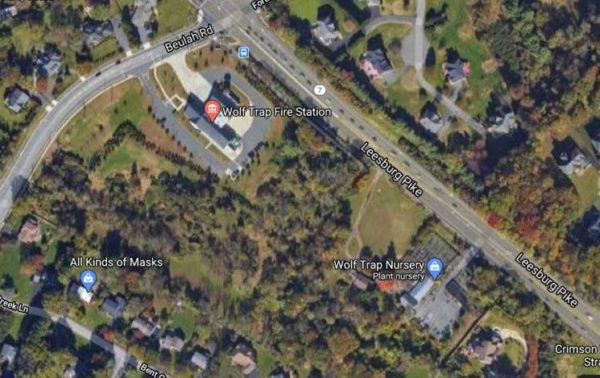 A proposal to build a wireless communications tower next to a fire station in Vienna is about get a vote of confidence from the McLean Citizens Association.

The unofficial town council of McLean will discuss a resolution supporting the project when its board of directors meets at 7:30 tonight (Wednesday).

“The Application is consistent with and furthers the goals and objectives of the [Fairfax County] Comprehensive Plan, and will provide improved communication services without undue impact on the surrounding community,” a draft of the proposed MCA resolution says.

The Reston-based cell tower developer Milestone Communications submitted plans to Fairfax County in October for a wireless tower on the Wolf Trap Fire Station site at the intersection of Leesburg Pike and Beulah Road.

According to Milestone’s plans, the tower will consist of a 114-foot-tall pole with antennas, topped by a two-foot lightning rod, and it will be surrounded by an eight-foot-tall chain link fence. The facility is expected to occupy 2,500 square feet within the 11.5-acre site, which is owned by the Fairfax County Board of Supervisors.

Milestone says all existing structures and open space will be preserved, and the impact of the unmanned facility on neighboring properties will be minimal, noting that the structure will be screened by existing trees.

“There will be no noise or fumes emitted and only 1-2 maintenance vehicle visit sper month maximum,” the plan submitted to Fairfax County says.

The tower will be initially outfitted with Verizon wireless cables and antennas, though designs show that it will be able to accommodate at least four more wireless carriers in the future. 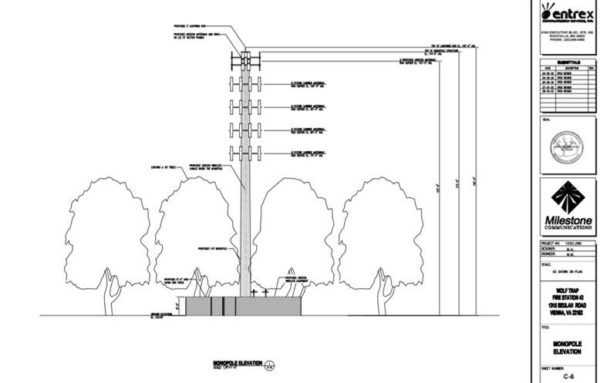 In order to pursue the project, Milestone has asked Fairfax County to grant a special exception and a proffer condition amendment to permit telecommunications facilities on the site, which is zoned for low-density residential use.

The project also has to be approved through the county’s 2232 review process, which determines whether proposals for public facilities are in accordance with the county’s comprehensive plan.

The MCA board of directors notes in its draft resolution that Milestone held a virtual town hall to present the project to the community and has agreed to provide additional buffering to further minimize the visual impact in response to community comments.

MCA says it supports the Milestone tower because it will “improve the cell phone capacity and coverage levels in the areas surrounding the property and would also work with existing neighboring Verizon sites to handoff signals for wireless transmission of voice and data.”

“This will improve customer service including Internet connectivity speed and voice connectivity, resolve customer complaints in the area, and help address increasing demand for quality wireless service so that the service does not further degrade,” the MCA resolution says.

The Fairfax County Planning Commission will hold a public hearing on the Milestone tower on May 12, and a hearing before the Board of Supervisors has been scheduled for June 8.