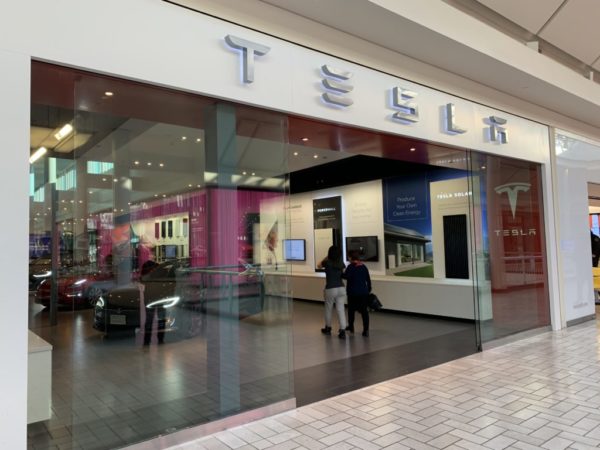 Vehicle manufacturers at Tysons Corner Center can now let customers purchase a car on-site and drive away with it.

The Fairfax County Board of Supervisors unanimously voted to grant the mall’s request that vehicle sales be a permitted use in its parking garages after a public hearing on Tuesday (Dec. 7).

Under the approved plan, Tysons Corner Center can allocate 30 parking spaces each to up to eight different vehicle manufacturers for vehicle storage and sales. The designated spaces will account for 240 out of the roughly 11,000 spaces available at the mall.

Tenants are prohibited from using the spaces to provide vehicle services, and the mall has committed to limiting loading activities to outside its operating hours, so they won’t disrupt customer traffic, Fairfax County Zoning Evaluation Division Director Tracy Strunk told the board.

“No outdoor display is going to be permitted. That’s one of the development conditions,” said Brian Clifford, a land-use planner with DLA Piper who represented Tysons Corner Center at the hearing. “At the moment, we only have two [tenants], but we asked for eight total just for the sake of flexibility, and there’s nothing that could limit another manufacturer from coming.”

The mall’s two current vehicle manufacturers are Tesla, which also has a store on Tyco Road, and Lucid Motors, which opened a showroom on Nov. 6.

According to Tysons Corner Center’s rezoning application, Tesla was allowed to have six designated parking spaces, including two electric chargers, to store vehicles when the county permitted its showroom in 2012, but customers couldn’t make purchases directly from the showrooms.

Instead, customers order a vehicle, make a deposit, and have the car delivered to them at a later date, according to Clifford.

He says allowing on-site vehicle sales will put Tysons Corner Center “at the forefront of the vehicle sales industry,” allowing the showrooms to offer a standard car dealership service but in an environment similar to other mall retail stores.

The Fairfax County Planning Commission recommended on Nov. 17 that the supervisors approve the mall’s application, a decision also supported by county staff.

Lucid Motors is also planning to open a store and service center at Tysons Galleria. That proposal got the planning commission’s approval on Oct. 20 and was later granted by the Board of Supervisors on Nov. 9.

Providence District Supervisor Dalia Palchik said she believes the addition of auto sales at Tysons Corner Center will add to the mall’s vitality.

“I did get a chance to swing by on the opening day of the Lucid location recently — very enthusiastic public, very well-displayed,” Palchik said. “I look forward to seeing more of these electric vehicle sales coming to our county, especially Tysons.”