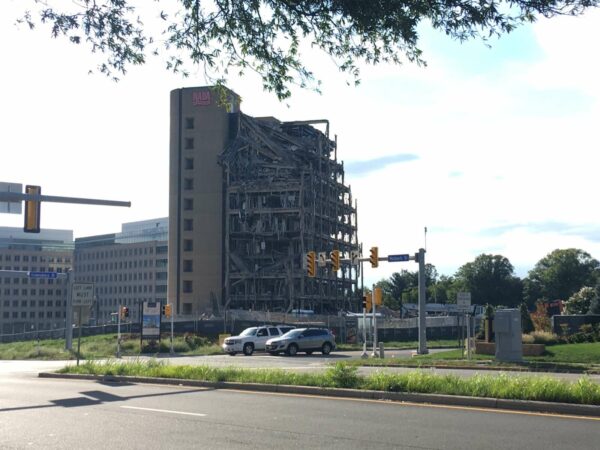 (Updated at 8:40 a.m.) Flood Watch in Effect — Fairfax County is under a Flood Watch into this afternoon, as “significant” rain is expected. Several roads have been closed due to flooding or downed trees, including Potomac River Road at Georgetown Pike, Lawyers Road at Hunter Mill, and Old Courthouse at Besley Road. [Fairfax County Fire and Rescue Department, FCPD]

Suspect in Tysons Sexual Assault Charged in New Incident — Fairfax County police have filed new sexual assault charges against a Woodbridge man who was arrested on Sept. 3 in connection with a sexual assault reported at a Tysons hotel in July. Reported on Aug. 26, the second incident involved the man allegedly assaulting a woman he’d arranged to meet at a hotel in the Seven Corners area. [Patch]

FCPS Shares SAT Results — The Class of 2021 performed above the national average on the SAT with just a 4.4% drop in participation, compared to a 31.4% global decline, despite the challenges of conducting standardized testing during the pandemic, Fairfax County Public Schools reported yesterday (Wednesday). Results from the College Board showed that Asian and white students recorded higher average scores than their Black and Hispanic counterparts. [WTOP]

Area Officials Consider Prioritizing Equity in Planning — The Metropolitan Washington Council of Governments board will vote on Oct. 13 on a regional transportation and land use plan that would prioritize low-income residents and communities of color when allocating funds for affordable housing, transportation, and other projects. Planners say the move would help address disparities in health outcomes and access to transit and other services. [The Washington Post]