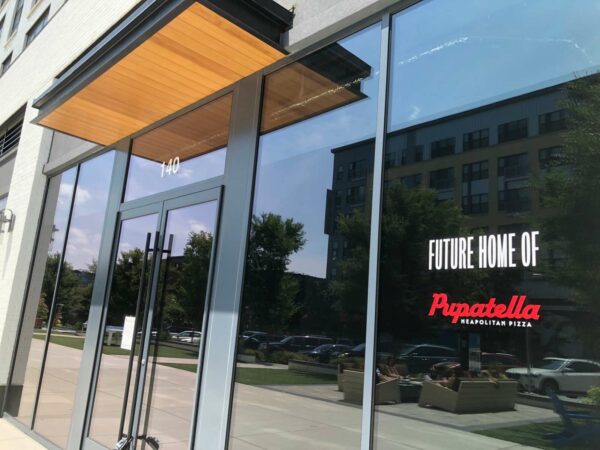 Construction is starting today (Tuesday) on Pupatella’s upcoming location in the Mosaic District, a spokesperson for the local pizza chain told Tysons Reporter.

Signage indicating that Pupatella will be moving into the space at 140 Penny Lane first emerged in early fall 2019, but no visible work on the site had been done since then.

Founded in 2007 by Enzo and Anastasiya Algarme, Pupatella began life as a food truck before opening its first brick-and-mortar location in Arlington in 2010.

Since then, the pizza restaurant has added four more locations, including a second Arlington spot and a site that opened in Reston this past December.

As first reported yesterday by the Washington Business Journal, Pupatella says it has secured a $7.5 million investment that will enable it to add as many as 15 pizzerias over the next few years.

New locations that have been confirmed so far are the Mosaic restaurant and a West Springfield site. Three other sites are currently under negotiation, including what would be the chain’s first Maryland site.

“Our focus is always going to be neighborhood Neapolitan,” Enzo Algarme said in a press release. “Our most recent capital raise gives us the opportunity to bring the true Naples pizzeria experience to more communities. It’s a dream that keeps growing for us.”

According to the spokesperson, Pupatella is aiming to open its Mosaic restaurant in late 2021.

It will join several other Italian venues at the Merrifield mixed-use development, which already has Alta Strada, Oath Pizza, and Matchbox Pizza. Most recently, The Italian Place opened across the street from Pupatella this past weekend, but a planned grand opening celebration has been delayed until later this month.