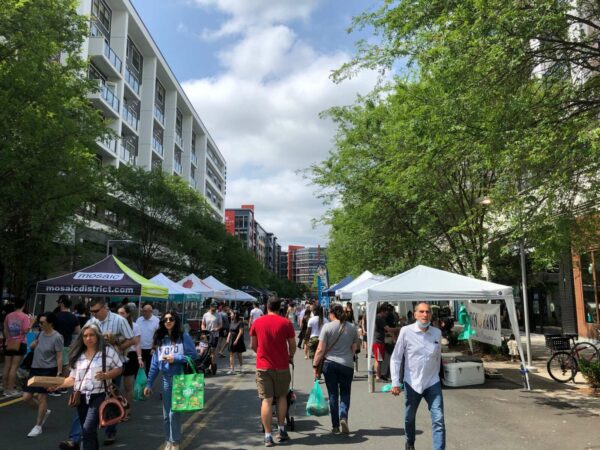 Save those rotting veggies and bits of meat left over from last night’s dinner, because Fairfax County is expanding its composting program.

As of yesterday (Wednesday), residents can now bring their food scraps to four county farmers markets for composting. The locations include the Mosaic District Farmers Market, which operates year-round from 9 a.m. to 2 p.m. on Sundays.

Food scrap composting turns waste into a resource. Those wrinkling carrots or uneaten bread crusts can be transformed over time into natural fertilizer, putting nutrients back into the soil.

Proper composting can also prevent food waste from ending up in landfills and streams, taking up space and potentially damaging the ecosystem.

“The county is working to divert as much waste from disposal as possible,” Fairfax County Department of Public Works spokesperson Sharon North said in an email. “In the past few years, we have focused on glass recycling and reducing contamination to improve single stream recycling…Providing food scraps drop off locations will help divert this compostable material from disposal.”

North says food scraps can account for as much as 20% of waste, but nearly all of it can be composted, including meat, bones, dairy, vegetables, fruit and bread.

Some food-related paper products, such as paper plates, paper towels, and napkins, can be composted as well, as long as there’s no cleaning products or bodily fluids on them. Plastic bags, dryer sheets, yard waste, fats, oils, grease, tin foil, and foam containers, however, should never be composted.

Fairfax County first implemented a composting pilot program in November 2020 at two larger locations: the I-95 Landfill Complex in Lorton and I-66 Solid Waste Transfer Station in Fairfax.

North says the initial pilot program was a success, prompting county leaders to discuss options for an expansion.

“One of the main things we learned is that our residents are willing to separate out food scraps and bring them to compost drop off locations,” she writes.

The I-95 landfill and I-66 transfer station will remain permanent composting drop-off sites. The four farmers markets that are now part of the program’s expansion were specifically chosen due to their accessibility and central locations within the county.

Three of the chosen markets are seasonal and managed by the Fairfax County Park Authority. The Mosaic District farmers’ market is a year-round, private market operated by FreshFarm.

“Making locations more accessible throughout the county at Farmers Markets will allow for more opportunities to drop off food scraps for composting rather than having that material in the trash,” North said.

The compost program is expected to cost the county an estimated $50,000 annually.

A 26-year-old man from McLean has been convicted by a federal jury for creating and watching child pornography, the U.S. Attorney’s Office for the Eastern District of Virginia announced yesterday…