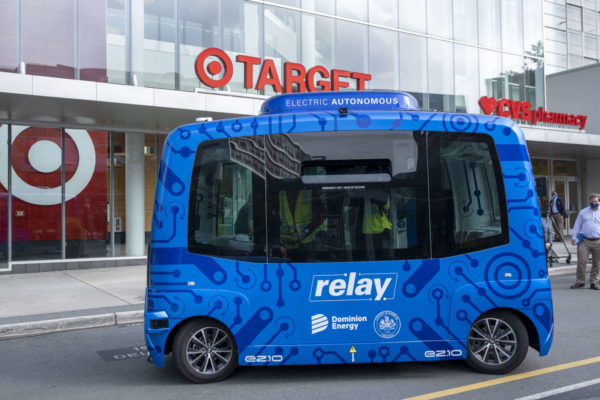 (Updated at 6 p.m.) Fairfax County’s first venture into self-driving public transportation has encountered impatient drivers and other difficulties, but the autonomous shuttle in Merrifield could still serve as a roadmap for expansion and future projects.

Operating between the Mosaic District and Dunn Loring-Merrifield Metro station since October, the high-tech Relay service navigates through bustling areas and amongst shoppers, giving free rides and demonstrating the possibilities offered by autonomous vehicles.

Eta Nahapetian, a manager with the Fairfax County Department of Economic Initiatives, remembers watching “Star Trek” as a kid, along with flying cars in the animated TV show “The Jetsons.”

“Here we are, trying to make some of those childhood cartoons a reality,” she said on June 10 during a webinar about autonomous technology, “Creating an Autonomous Vehicle Ecosystem in Virginia.”

Sarah Husain, a transportation planner with the Fairfax County Department of Transportation, said the technology has elicited high interest from the community for how it helps people with disabilities.

During the presentation, Husain also described some of the challenges that have emerged during the pilot project, which is a joint effort between the county and Dominion Energy.

She said drivers can get impatient and illegally pass it, so officials with the project worked on adding signage and enlisted the Fairfax County Police Department to help with the issue.

In response to complaints about vehicles passing the autonomous shuttle, the McLean District Station has assigned officers to conduct extra patrol and enforcement to address drivers “speeding or passing Relay,” the FCPD said.

“We’d like to ask for our community’s patience when driving behind the shuttle,” police said. “Relay should only be passed, with care, when a full lane is available.”

According to the county, “Do not pass” signage was installed alongside Eskridge Road and Merrilee Drive in March 2021. Stickers with the same message were also placed on the shuttle.

“We sought out these challenges with the pilot,” Husain said, noting several solutions that came forth, such as installing monitoring devices that detect if the shuttle needs more time to pass through an intersection.

The technology remains limited in some ways. For instance, if an idled vehicle, such as a parked car, is in the way, a shuttle attendant has to take over in manual mode to advance the shuttle.

The shuttle runs from 10 a.m. to 2 p.m. Monday through Thursday from the Dunn Loring station to the Barnes & Noble in the Mosaic District. It’s designed to fill the “first/last mile” need in public transportation, connecting travelers to their ultimate destinations.

Fairfax County is seeking additional funding to continue Relay’s length of service and expand the routes that it serves. The pilot project is slated to end in August.

Dominion Energy, which supplied the shuttle, says an expansion of the pilot is among many options that it is considering for future uses of automated vehicle technology.

“Dominion Energy is considering other opportunities that may include an expansion of the current project,” Dominion Innovation Strategist Julie Manzari said. “The purpose of the pilot is to learn and gather information that will help us adjust or pivot to other concepts.”

END_OF_DOCUMENT_TOKEN_TO_BE_REPLACED

More Stories
Fairfax County reports most COVID-19 cases in one day since May, but overall transmission still lowMorning Notes