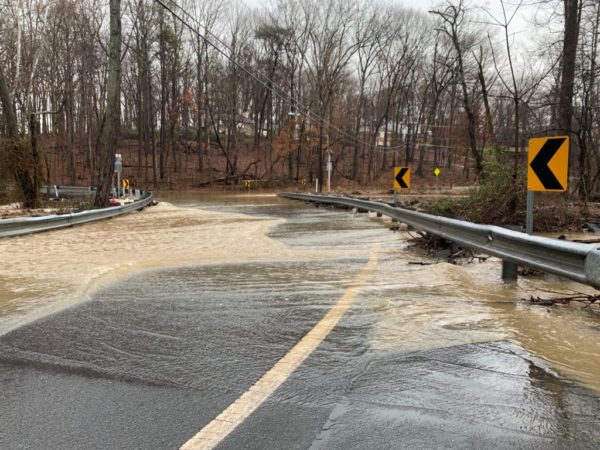 The National Weather Service has issued a Flash Flood Watch for the D.C. region, including Fairfax County, that will take effect at noon today (Thursday).

Set to expire at midnight, the advisory warns of the potential for two to four inches of rain to fall within a short period of time:

* From Noon EDT today through this evening

* A cold front will drop southward into the area today. This front will become the focus for slow moving thunderstorms this afternoon and evening. Because of the slow motion and ample moisture in the atmosphere, storms may drop 2 to 4 inches of rain a short period of time, resulting in flash flooding.

* Heavy rainfall in a short amount of time can result in rapid rises of water in streams, creeks, and urban areas.

The Baltimore-Washington NWS says the Flash Flood Watch is primarily in effect for the the northern and central parts of the region, but flooding could occur almost anywhere, and the risk could extend to tomorrow (Friday).

“A Flash Flood Watch means that conditions may develop that lead to Flash Flooding. Flash Flooding is a very dangerous situation,” the NWS said. “You should monitor later forecasts and be prepared to take action should Flash Flood Warnings be issued.”

A Flash Flood Watch is now in effect across portions of the area for this afternoon and this evening. Slow moving thunderstorms may produce several inches of rain, resulting in flooding. pic.twitter.com/qgWEunr4sp