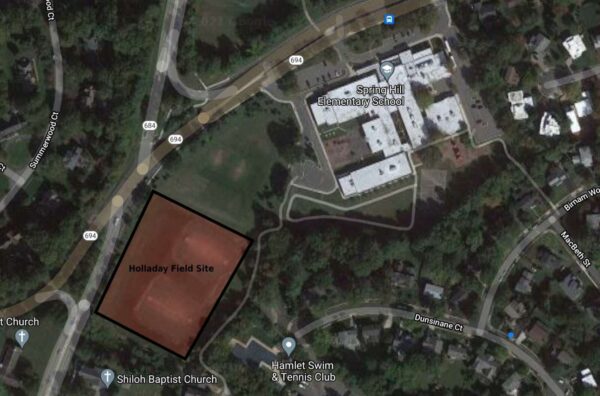 At its meeting tonight (Wednesday), the Fairfax County Park Authority Board will finalize the funding to convert Holladay Field from natural grass to synthetic turf.

The plan for the field was approved by the board in June 2020, but more funds are now needed because of an increase in material prices due to the pandemic. The board has been asked to approve an additional $127,135 to cover a budget shortfall.

According to the board’s meeting agenda, the funding will come from a park bond approved by Fairfax County voters in 2016 — specifically from money that was tagged for a redesign and expansion of Langley Fork Park.

The project carries an overall estimated cost of $1.6 million. About $1.5 million in funds have already been approved, including money from the 2016 park bond, renovation funds for existing Langley Fork Park facilities, and $650,000 contributed by McLean Youth Soccer, which is working with the park authority on the project.

Located at 1311 Spring Hill Road next to Spring Hill Elementary School, Holladay Field is a 5.1-acre park with a full-size natural-turf athletic field.

“The change [to synthetic turf] is a reflection of the continued growth in field sports such as soccer,” Pedersen said.

The project will help McLean Youth Soccer provide more practice and game-day space for its 3,000-plus players, according to MYS Executive Director Louise Waxler, who says there is “a critical need” for more facilities as the program has grown.

“The conversion of the Holladay field to synthetic turf offers the youth of McLean another quality playing surface requiring far less maintenance and increased accessibility for user groups,” Waxler said.

The Park Authority has contracted with Fieldturf to install the new artificial turf field.

According to the board agenda, the county received an initial proposal from the contractor for $1.48 million on Jan. 18. That was negotiated down to $1.43 million on Feb. 8, but the price was still 16% higher than anticipated based on an engineer’s estimate that it would cost $1.2 million.

County staff reduced the budget shortfall from $292,000 to the $127,135 scheduled to be approved today by eliminating a proposed fence and soccer side goals from the project. McLean Youth Soccer will instead provide movable side goals for the field.

The project timeline has not changed, with construction still set to start in mid-June and expected to take approximately four months.

“Thanks to Supervisor Foust, the Fairfax County Park Authority, and the generous investment by two private donors within McLean Youth Soccer, we are one step closer to meeting our field needs,” Waxler said. “This is not only an investment in our kids, but also an investment to the McLean community as a whole.”