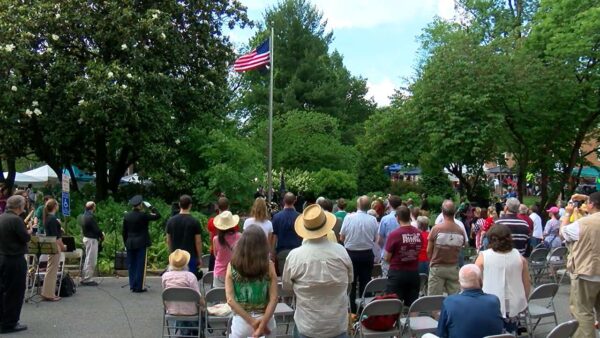 (Updated at 3:10 p.m.) Memorial Day festivities are coming back to the City of Falls Church, but they won’t be quite as raucous as previous years.

Like the Town of Vienna, Falls Church City opted for virtual events last year in lieu of its usual crowd-drawing celebration to honor people who have died serving in the military and mark the unofficial arrival of summer.

According to Falls Church Director of Recreation and Parks Danny Schlitt, the Memorial Day Parade and Festival is the city’s signature event, drawing more than 15,000 people in past years.

“This year we will keep the numbers limited based on whatever the Governor’s guidance will be at the time of the event,” Schlitt said. “The ceremony will be a limited, pre-registration event, and the other festivities are virtual or viewable from the comfort of your front yard. The safety of our residents and visitors is our number one priority. We hope to be back to normal next year.

While the festival aspect of the event will still largely be absent, with no food vendors or amusement rides planned, the City of Falls Church shared in its newsletter yesterday (Thursday) that it will host a Memorial Day ceremony and parade this year, along with the Beyer 3K Memorial Day Fun Run, which will mark its 40th anniversary.

The city is also organizing an 11-day scavenger hunt — its fourth in the past year since the pandemic began.

Like the Historic Scavenger Hunt in June, the Halloween-centered hunt in October, and the Valentine’s Day-inspired Heartfelt Hunt in February, the Memorial Day Scavenger Hunt will send participants dashing around the city to find various locations that match provided clues.

The specific logisitics of the event are still being worked out, but people who complete the hunt will receive a custom-made T-shirt.

“If the popularity of the past three are any indication, this next one will be our best yet (no pressure, Special Events Coordinator),” the City of Falls Church says.

Sponsored by Don Beyer Volvo, the 40th year of the Beyer 3K Memorial Day Fun Run will deviate from past iterations by giving runners the full week leading up to Memorial Day to complete the 3,000-meter race on their own instead of competing in a group.

Participants must register online in advance. Fun Run T-shirts will be available for pick-up on May 31 from 8:30 to 10:30 a.m. in front of the Falls Church Community Center (223 Little Falls St.).

However, attendance will be limited to 130 people “because we still have a pandemic to deal with,” the City of Falls Church says. Spots can be reserved online starting on May 4. The ceremony will also be recorded by Falls Church Community Television.

The 2021 Memorial Day Parade will be scaled back from past years with a lineup mainly composed of city government vehicles, such as school buses, police cruisers, emergency vehicles, and public works trucks.

Falls Church City says that the parade will “hopefully” be led by former Councilmember and Planning Commissioner Lindy Hockenberry, who served as the 2020 Memorial Day Parade grand marshal even with no actual parade.

Instead of going down Park Avenue in accordance with tradition, this year’s parade will travel throughout the city. An exact route has not yet been determined, but the city says it will likely be similiar to its Snow Emergency Routes.

Photo via City of Falls Church/YouTube