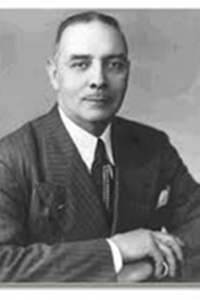 Former Falls Church resident and civil rights pioneer Edwin Bancroft Henderson is one of five Black Virginians being honored with a new series of highway plaques aimed at highlighting Black history throughout the state.

Options for the new markers were submitted by Virginia students, and of the 100 submissions, five were chosen.

According to a press release from the Governor’s office:

Henderson, a member of the Basketball Hall of Fame known as the “Father of Black Basketball,” organized athletic leagues for African Americans, wrote The Negro in Sports (1939), organized the first rural chapter of the NAACP, and was president of the NAACP Virginia state conference as he worked for civil rights.

The recognition also comes after years of work by Henderson’s grandson to get his grandfather’s contributions to civil rights recognized, along with his promotion of physical fitness in young Black athletes and work to document Black sports, as reported by Northern Virginia Magazine.

The marker for Henderson was suggested by Sullivan Massaro from Kings Glen Elementary in Springfield, Virginia.

“The Historical Marker Contest helped me learn more about Black Virginians who have made a difference, like Dr. Edwin Henderson,” Massaro said in the press release. “Dr. Henderson introduced the sport of basketball to Black athletes in Washington, D.C. and is a big part of why basketball is so popular today. As I researched him I learned how much he did not only for the sport of basketball, but for civil rights in Virginia. I couldn’t believe that he did not already have a historical marker, so I chose to nominate him for the contest.”

In 2013, Henderson was inducted into the Naismith Memorial Basketball Hall of Fame.

“On behalf of the Henderson Family, I’d like to express my deep appreciation to Sullivan and his teacher Ms. Maura Keaney for the recognition of Dr. Edwin Bancroft Henderson’s accomplishments in Virginia by placing a historic marker in front of his home in the City of Falls Church,” Edwin Henderson II said. “This contest is part of an important effort to intertwine African American history into all school curriculum, and ensure that Virginia’s diverse history is represented honestly in classrooms across the Commonwealth.”

Image via University of the District of Columbia