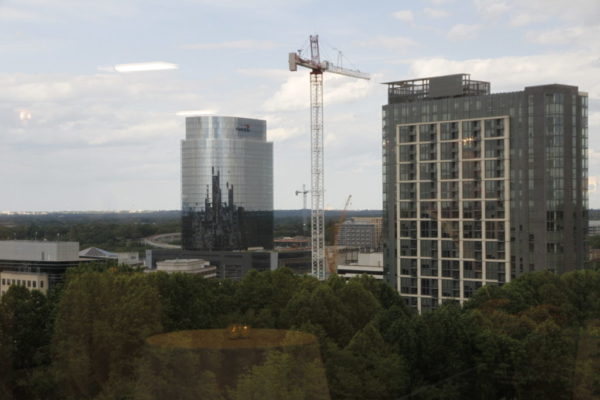 (Updated at 11:30 a.m. on 4/16/2021) The Monarch, a luxury high-rise condominium complex, is still in the process of being built northeast of Tysons Galleria.

Construction on the Jones Branch Drive property began more than two years ago, and it was originally set to open in 2020.

However, the project stalled last year when the developer Renaissance Centro split ways with its hired contractor. Right now, there is no official timeline for completion, though the owners recently told frustrated citizens that once construction begins again, the building should be done in 21 to 24 months.

“A new contractor has been selected and should be announced in the next few weeks. Construction will commence very shortly thereafter,” Kami Kraft, vice president of The Mayhood Company, which is marketing the project, told Tysons Reporter.

The Monarch is a luxury high-rise condominium complex with 101 units. As few as four to six units will be on each floor, according to the sales website. Prices for the units range from $600,000 to just under $3 million.

The 20-story tower will be part of the 19-acre Arbor Row mixed-use development envisioned on Westpark Drive, joining the residential building Nouvelle, which opened in 2015, and The Mather, a senior living facility set to open in 2023.

Kraft confirmed that units at The Monarch are still being sold, and private tours of the sales gallery are open for prospective buyers by appointment. More information on The Monarch can be found on the sales website.

Correction: This article initially described The Monarch as an apartment complex. The units are condos, not apartments for rent. H/t to nvacondos for pointing out the error.