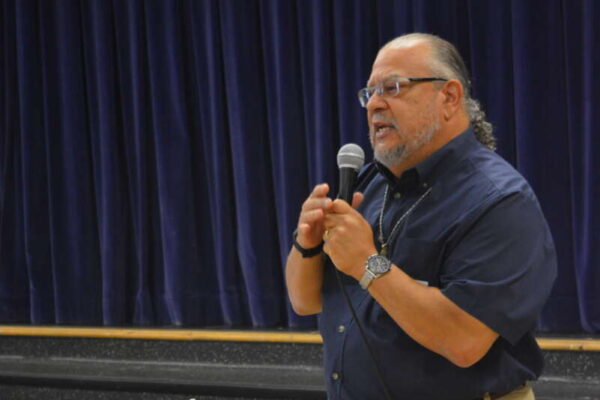 He takes over the term vacated by Shawna Russell in February and will serve until the end of the year.

Russell, who announced her resignation during a board work session on Feb. 23, was the second board member to resign this year, following the departure of longtime board member Lawrence Webb. He announced his retirement in January, and the board appointed parent-activist Sonia Ruiz-Bolanos to replace him.

During the meeting, board members thanked all eight candidates to replace Russell, especially those who also put their names forward earlier this year. 11 people submitted requests to be appointed as Webb’s replacement.

Board members pointed to Henderson’s lifetime of involvement in Falls Church City documenting local Black history and his 25 years of experience as a teacher and counselor in Fairfax County Public Schools as qualities that recommended him to the position.

“I found this a very difficult decision because there were so many qualified candidates,” board member Philip Reitinger said. “At the end of the day, in my personal assessment, I thought Mr. Henderson presented the best opportunity at this time to help us move forward, to unify people, to move forward on diversity, equity and inclusion, given his deep commitment to this city over the course of a lifetime.”

In an interview Henderson gave in February, he recalled facing pushback for how he taught history “from the perspective of an African-American man” and said he was “not always appreciated.”

“I heard about how people talked about my grandparents, how they looked up to them, but I saw nothing preserving that history. I saw stuff about George Washington, George Mason, Thomas Jefferson, and all of these founding fathers, but there was nothing to preserve the history of civil rights,” Henderson said in the interview.

According to his LinkedIn profile, he was an elementary school guidance counselor for nearly six years before teaching middle school U.S. history for 10 years.

“I really appreciated hearing everyone’s perspective,” Vice-Chair Laura Downs said. “I was humbled by the talent that stepped forward.”

She and board member Greg Anderson gave a special shout-out to the lone student candidate, 11th grader Hunter Hicks.

Board Chair Shannon Litton encouraged citizens to run this fall, when four school board seats will be up for election.