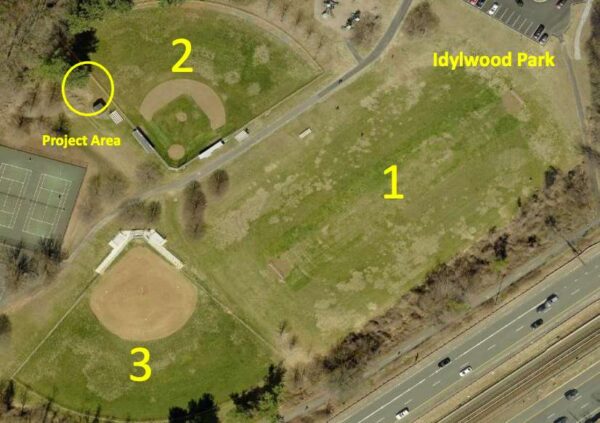 The Falls Church Kiwanis Little League is hoping not to strike out on a proposal to add new batting cages to a field at Idylwood Park between Falls Church and Tysons.

“Hitting stations allow multiple players to practice their skills simultaneously in a safe, protected space,” a staff report said. “By making such efficient use of space, this improvement will alleviate some of the competing uses in this popular park.”

The Kiwanis Little League has raised $12,737.25 for the project, but is seeking a matching contribution from the county in the form of a Mastenbrook Grant, which provides up to $20,000 in matching funds for local park projects.

In its application for the grant program, the Kiwanis Little League says that players hoping to use batting cages currently have to travel to Arlington, and a new set of cages in Falls Church could help alleviate the demand.

In a supplement to its application, the league further explained the benefit of adding hitting cages at Idylwood Park, which is located on Virginia Lane:

Hitting stations would be an extremely popular recreational resource at Idylwood Park and many different groups would benefit from them including several hundred FCKLL members, local travel teams, middle and high school students, as well as the general public. They would provide a new year-round recreational and developmental resource for individuals, teams and the community at-large, without adding burden to fields. They are a practical and effective alternative to batting cages and allow multiple players to work out in a confined space, safely and at the same time. Equally important, it provides the community with another opportunity to be outside and engage in physical activity.