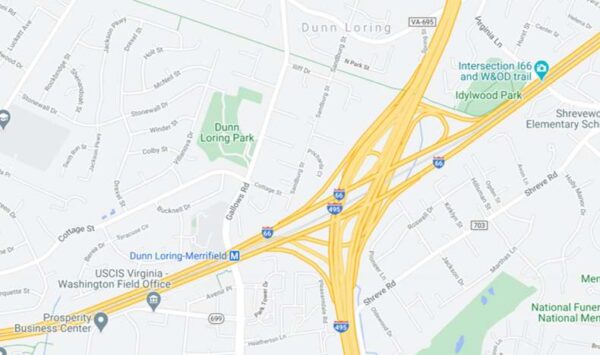 Construction on the Transform 66 Outside the Beltway project will continue disrupting travel at the I-66 and I-496 interchange in Dunn Loring this week.

Overnight lane closures and traffic stoppages will begin at 10 p.m. today (Monday) on I-495 South, whose general purpose lanes will be reduced to a single travel lane from Route 7 (Leesburg Pike) approaching I-66 to accommodate overhead bridge work and partial demolition of the I-66 West bridge over I-495 South.

The Virginia Department of Transportation says drivers should expect periodic stoppages of up to 20 minutes between midnight and 4 a.m., though the lane closures will last until 5 a.m. on Tuesday. The 495 Express Lanes will not be affected.

The 495 lane closures will take effect again during the same time frame on Thursday (April 8) and Friday (April 9). 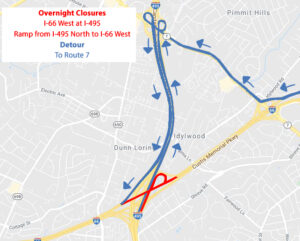 That final day will coincide with more substantial closures planned for I-66.

On Friday and Saturday (April 10), all westbound lanes approaching I-495 will be closed from 10 p.m. to 6 a.m. so that construction crews can install bridge beams for new ramps at the I-66/I-495 interchange, VDOT says. The ramps to I-66 West from 495 North and the 495 South Express Lanes will also be closed.

“Drivers traveling on I-66 and I-495 during this time should expect delays and should consider using alternate routes,” VDOT said.

Here are the details on those closures from VDOT:

Ramp from the 495 Express Lanes South to I-66 West

The I-66 and I-495 closures both stem from ongoing efforts to reconstruct the interchange as part of the Transform 66 project, which will extend the I-66 Express Lanes 22.5 miles from Dunn Loring to Gainesville.

“Improvements at the interchange include adding access to and from the existing 495 Express Lanes and the new I-66 Express Lanes, as well as building new connections between express and general-purpose lanes,” VDOT said.