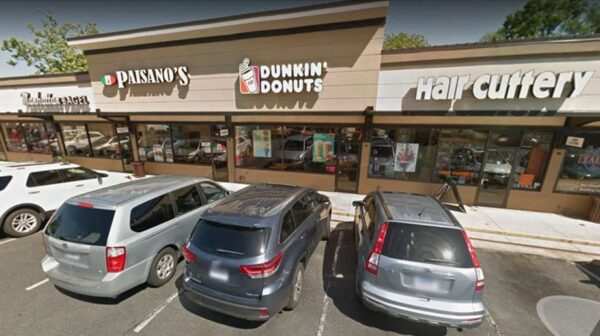 A girl reported that she was harassed and followed by an older man outside the Dunkin Donuts at 314 Maple Avenue West on March 17, the Vienna Police Department says in its round-up of highlights from the week of March 19-25.

According to the report, the incident occurred at 3:15 p.m. when the “female juvenile reported that she was harassed by an older man in the Dunkin Donuts’ parking lot.”

The report classifies the incident as a “suspicious event.”

The weekly highlights report describes the incident as follows:

An employee reported that a woman parked her vehicle in the drive-thru line, walked into the restaurant, and began acting disorderly. When the employee asked her to leave, she crawled out the drive-thru window, kicking the manager, and throwing food at a customer. The woman got back into her vehicle, drove onto Maple Avenue, parked her car on the roadway, and began trying to climb into a delivery truck that was stopped in traffic. The woman got back into her vehicle and fled the area before officers arrived.

In a particularly oddball occurrence, a resident on the 600 block of Hine Street SE told the VPD at 2:59 p.m. on Tuesday (March 23) “that he had a cannonball that he wanted to dispose of.”

“The resident found the cannonball while gardening in his yard several years ago,” the police report says.

Vienna officers were accompanied by an explosive ordinance disposal team from the Fairfax County Police Department when they responded to the request. The cannonball was handed off to the county team for destruction.