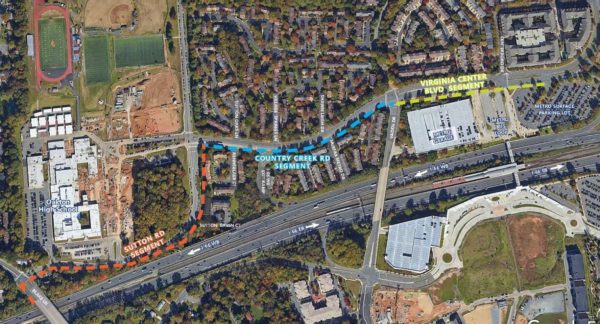 The Virginia Department of Transportation’s period for public comments on proposed pedestrian and bicycle improvements around the Vienna Metro station will close on Monday (March 29).

VDOT held a virtual public information meeting on March 18 to discuss its plans, which are being developed in conjunction with efforts to construct a network of pedestrian and bicycle facilities along Interstate 66 as part of the Transform 66 Outside the Beltway project.

The I-66 parallel trail network will cover 11 miles between Gallows Road in Dunn Loring and Centreville, connecting existing regional trails — including the Washington & Old Dominion Trail — and adding new pedestrian bridges over I-66, according to Andrew Beacher, VDOT’s preliminary engineering manager for Fairfax and Arlington counties.

“The Vienna Metro bicycle and pedestrian improvements project is a key portion of that larger network that’s going to be implemented in the coming years,” Beacher said. “…It is an extensive planned network that we hope will ultimately serve the community well.”

The Fairfax County Department of Transportation told Tysons Reporter in February that the Vienna Metro portion of the project is being implemented separately, rather than as I-66 is widened, because the trail has to deviate from the interstate “for engineering reasons and for access-to-the-community reasons.”

Divided into three segments between Blake Lane and the Vienna Metro surface parking lot, improvements currently being considered include:

In addition, two new bus stops will be added on Sutton Road “to provide convenient access to Oakton High School faculty, staff, and students,” and six existing stops on Country Creek Road will be relocated to align with the proposed new crosswalk locations, FCDOT project coordinator Caijun Luo said during the March 18 meeting.

At Fairfax County’s request, VDOT is also looking at possible interim solutions to bridge the anticipated gap between the completion of the Transform I-66 improvements in late 2022 and the conclusion of the Vienna Metro project, which is not expected to finish construction until spring 2025.

State transportation planners have proposed restriping Country Creek Road and Virginia Center Boulevard to create a two-way, 10-foot-wide cycle track with a buffer of concrete or flex posts to separate bicyclists from drivers.

According to VDOT project manager Zamir Mirza, it will be harder to implement temporary measures on Sutton Road due to variations in road width, especially approaching the curve near the southern entrances of Oakton High School.

“We are considering design options for this segment, including removing parking on the northwest side of the site for the bicyclists,” Mirza said. “We may need to consider widening the existing sidewalk also, or have a combination of the two options.”

Mirza added that the project website will be updated when VDOT finishes studying the proposed interim options for Sutton Road.

The Vienna Metro improvements project has a total estimated cost of $9.4 million.

A public hearing on the project design will be held this summer before getting approved in the fall. VDOT plans to begin right-of-way acquisitions and utility relocations in the spring of 2022, and construction is expected to begin in summer 2024.

Community members can submit comments to [email protected] or by mail to VDOT’s Northern Virginia District office. VDOT also has a survey to gather feedback.