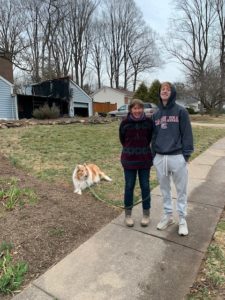 A house fire on Baton Drive in Vienna yesterday afternoon (Monday) might have turned into a tragedy, if not for the intervention of a few quick-thinking, canine-loving neighbors.

The blaze occurred between 4:30 and 5 p.m. on the 1900 block of Baton Drive, according to the Fairfax County Fire and Rescue Department. Vienna Volunteer Fire Department Chief John Morrison confirmed to Tysons Reporter that units from his department also responded to the incident.

James Madison High School student Peyton Van Stone had just returned home from walking his family’s dog and was chatting outside with Ann Haines, a neighbor from across the street, when they noticed smoke issuing from a house a few doors down the road.

From there, Peyton says he stopped thinking and just acted.

“Me and [Haines] just ran up to the house to check it out and see what was happening, because it looked like there was a fire, or at least there was a lot of black smoke coming out,” he told Tysons Reporter this morning during a break in his online classes.

After another passerby called 9-1-1, Haines called the house’s resident, who is a friend since they often take their dogs on walks around the same time. She learned that no people were home, but their dog — a Rottweiler named Daisy — was inside in a crate.

Upon finding that the front door was locked, Peyton asked the next-door neighbors if they had a key before going around the back of the house and finding a way inside.

The fire had started outside the house near a detached garage, but it was spreading to the main structure by the time Peyton and Haines dashed upstairs to let Daisy out of her crate. Haines had a leash and was able to lead the dog outside, a feat made easier by Daisy’s familiarity with her.

After that, Peyton says fire trucks arrived to put out the blaze, and they later reunited Daisy with her owners.

“I’m glad everyone was okay,” Peyton said. “…I mean, I would hope someone would do the same for my dog, so I was just looking out for another neighbor, because that’s man’s best friend, a dog.” 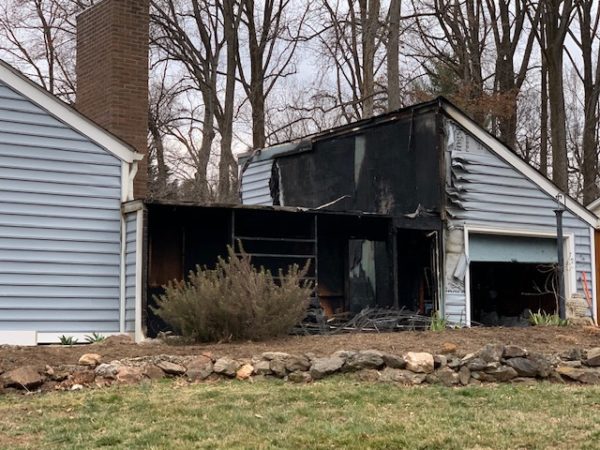 While Peyton says he was too caught up in the moment to feel scared, his mother, Rebecca Van Stone, describes the ordeal as “surreal” and “very scary” to watch unfold. She recalls that the fire initially looked small, like smoke from a fire pit, before rapidly growing to the point where she worried it would spread to nearby trees and other houses.

“I just had thoughts of California, of these whole neighborhoods going up in smoke, and you could hear the crackling of fire,” Van Stone said.

Van Stone added that she’s proud of her son and Haines for acting quickly to help their neighbors. She was also impressed by the fire department’s response.

“They were very quick and efficient, I have to say, to save this woman’s house,” she said. “If it wasn’t for how quick they responded, the whole house would’ve been up in flames.”

According to Fairfax County Fire and Rescue Department spokesperson Ashley Hildebrandt, investigators determined that the fire was accidental in nature, sparked by spontaneous combustion from recently added mulch.

After starting in a mulch bed, the fire spread to the detached garage and the main house but was largely confined to the exterior of the building. It caused $25,000 in damages, but people and animals all got through the incident unscathed.

“We all made sure the owners weren’t home. To know they were safe was the biggest thing,” Haines said. “Then, we knew we could focus on Daisy.”