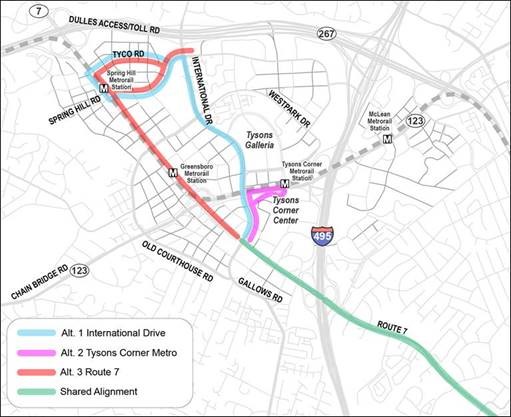 The Fairfax County Department of Transportation (FCDOT) has developed three potential routes for a bus rapid transit system (BRT) that would travel through Tysons and along the Route 7 corridor.

County staff will hold virtual public meetings at noon on Friday (March 19) and at 7 p.m. next Wednesday (March 24) to share details about the proposed routes, including possible station locations and performance analyses based on tests of the options.

Fairfax County has been studying options for bus rapid transit in Tysons since October 2018 as an offshoot of a larger Northern Virginia Transportation Commission Envision Route 7 BRT project that would establish bus service between Tysons and the Mark Center in Alexandria through Falls Church.

The Fairfax County Board of Supervisors recently approved $140,000 in funding to support the next phase of NVTC’s study, which will evaluate mobility benefits, impacts, and potential issues that could arise from the proposed bus system.

The county’s Route 7 BRT study focuses specifically on the Tysons portion of the project, which encompasses approximately three miles of Leesburg Pike from the Spring Hill Metro station to the I-66 interchange.

Based on a map from FCDOT, the three routes currently being considered are:

FCDOT staff will present a preferred route out of those three options during the two upcoming public meetings, and there will be time for questions and provide feedback.

Attendees can register online to receive a link to the WebEx meetings or dial in by phone at 1-844-621-3956. Comments can also be provided through an electronic survey that will be available after the meetings or through the project team’s feedback form.

Comments on the Route 7 BRT study will be accepted until April 14.