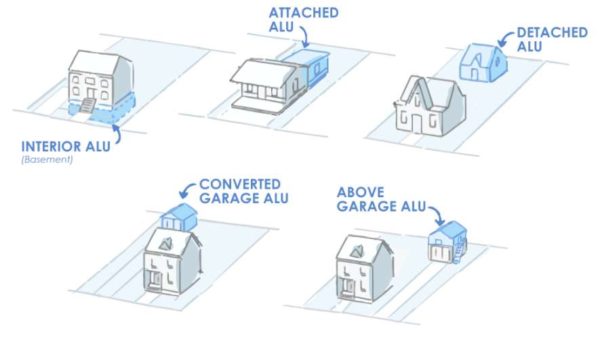 The Fairfax County Planning Commission voted unanimously on Wednesday (Mar. 3) to recommend that the county replace its current zoning code with a new draft resulting from the Zoning Ordinance Modernization Project (zMOD) that has now been underway for almost four years.

The 12-0 vote came after more than an hour of debate over the county’s proposed regulations for accessory living units (ALUs) — independent residential units located on the same property as a primary dwelling — and home-based businesses, which have emerged as two of the most contentious components of the 614-page document.

“The zMOD result on ALUs and home-based businesses, I believe, misses the mark,” Mason District Commissioner Julie Strandlie said. “It does not incorporate community concern and avoids a significant opportunity to make a real difference in housing policy. If we want to successfully expand housing options, we need community input, involvement, and buy-in.”

Released on Feb. 17, the draft zoning ordinance crafted by county planning staff and the consultant Clarion proposed allowing ALUs for single-family detached dwellings with an administrative permit if they meet certain requirements, including a maximum gross floor area of 800 square feet or 40% of the principal dwelling and that an occupant be at least 55 years old or have a disability.

Citing an “exceptional amount” of public opposition to that proposal, including at a public hearing on Jan. 28, the planning commission recommended that the Fairfax County Board of Supervisors instead utilize a special permit review process for all ALUs, which requires property owners to notify neighbors and make their case at a public hearing.

The commission also recommended lifting the requirement that an occupant have a disability or be 55 years or older when an ALU is approved with a special permit, and allowing units to fill a basement or cellar based on its existing size on the date the new zoning ordinance becomes effective.

The commission also recommended amending the draft to prohibit on-site customers for home-based businesses approved through an administrative permit, except in cases involving instructional activities at a “specialized instruction center” — i.e., private tutoring or music lessons — or a health and exercise facility.

Instruction centers and health and exercise facilities could have up to four students at a time and eight students in a day. Other home-based businesses could have customers if they obtain a special permit.

In addition, all home-based businesses will have to be approved by the Fairfax County Health Department if there is a well or septic tank on site, a provision that was already proposed for ALUs.

While acknowledging that ALUs could help people who otherwise might not be able to afford to live in Fairfax County, the majority of commissioners ultimately expressed reservations about loosening restrictions across the entire county without getting a clearer sense of the potential impact on traffic, parking, and other issues, especially in high-density areas.

The commission recommended that the Board of Supervisors direct the county planning department to convene a task force that will study ALUs and home-based businesses for 18 months and deliver a report with any recommendations for further changes to the zoning ordinance.

Earlier in the meeting, the commission shot down a proposed zoning amendment that would have altered regulations for flags and flag poles, calling it “a solution in search of a problem.” The county’s only existing regulation for flags is a limit of three per lot.

Fairfax County launched its zMOD initiative in March 2017 with the goal of simplifying and updating a document that had not undergone a comprehensive revision since it was first adopted 40 years ago.

The Board of Supervisors is scheduled to hold a public hearing on the new zoning ordinance on Tuesday (Mar. 9). If the ordinance is adopted as it was approved by the planning commission, it would take effect at 12:01 a.m. on July 1.