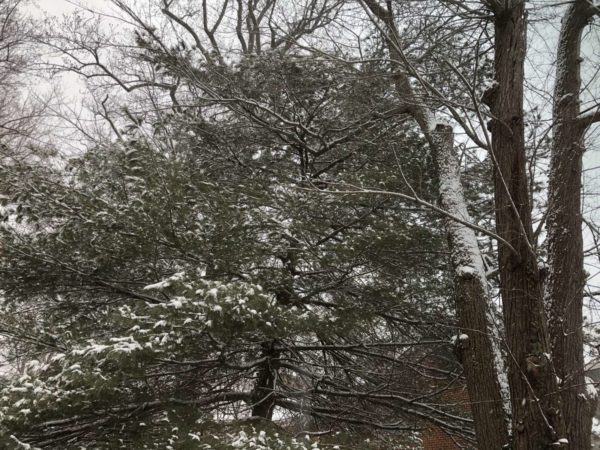 Updated at 2:10 p.m. — As of 1:43 p.m., the Winter Weather Advisory for the D.C. area has been extended to 9 a.m. tomorrow (Tuesday), with the National Weather Service now predicting up to two inches of snow.

Earlier: The National Weather Service has extended its Winter Weather Advisory for the D.C. region, including Fairfax County, to midnight tomorrow (Tuesday).

After being blanketed with two to four inches of snow on Sunday, the area could see up to one inch of additional snow accumulation and one-tenth of an inch of ice accumulation today, according to the NWS advisory.

The current forecast for the Tysons area suggests freezing rain is likely today, possibly mixed with snow before 7 p.m. There remains a 50% chance of snow showers or some other kind of precipitation tomorrow, mainly before 1 p.m.

The NWS warns that the “hazardous conditions” could affect the morning and evening commutes.

“Slow down and use caution while traveling,” the NWS said. “When venturing outside, watch your first few steps taken on steps, sidewalks, and driveways, which could be icy and slippery, increasing your risk of a fall and injury.”

[2/1/21 @ 9AM UPDATE]: A Winter Weather Advisory remains in effect until 12 AM Feb 2nd. Light snowfall is expected to linger throughout the day, but no significant accumulation is expected. Plan on slippery road & sidewalk conditions. #WinterWeather #FFXSnow pic.twitter.com/kDHIIW7ZMY

Warnings against traveling evidently did not deter many people from hitting the road yesterday.

The Virginia State Police responded to 362 traffic crashes and 321 disabled/stuck vehicles between midnight and 9 p.m. on Sunday. The VSP’s Fairfax Division, which encompasses Fairfax, Loudoun, Prince William, and Arlington counties as well as the City of Alexandria, recorded 44 disabled vehicles and 46 crashes.

“State police is still advising folks to hold off on their travels until later Monday or even possibly Tuesday, depending on what their region has experienced in the way of snow, freezing rain, and ice,” VSP Public Relations Director Corinne Geller said in a news release.

Pedestrians are not safe from peril either. The Fairfax County Fire and Rescue Department reported early this morning that, in the half-hour span between 5:24 and 5:56 a.m., it had responded to two incidents of people slipping on ice and injuring themselves.

Fairfax County Public Schools announced last night that all in-person activities in schools or on school grounds have been canceled for today, including extracurricular activities and athletic team practices. All students continue to learn virtually.