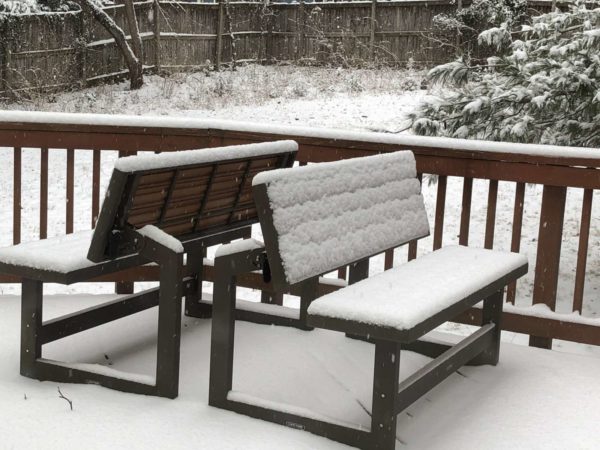 As anticipated, Fairfax County residents woke up this morning to a world coated in snow, which is expected to continue falling throughout the day and potentially into tomorrow.

As of 7:08 a.m., the National Weather Service was predicting up to four or six inches of snow to accumulate in the D.C. area, including Fairfax County, as a Winter Storm Warning remains in effect until midnight.

Here is more from the most recent NWS alert:

* WHAT…Heavy mixed precipitation expected. Snow accumulations through Sunday night around 4 to 6 inches with ice accumulations of a light glaze.

* WHEN…Through midnight EST tonight. The steadiest snow will fall through this afternoon before tapering off to an intermittent mix of light snow, sleet, and freezing rain. Additional snow is expected Monday through Monday night with additional accumulations most likely around 1 to 3 inches, bringing the storm total accumulations around 4 to 8 inches.

* IMPACTS…Travel will be very difficult Sunday through Tuesday morning due to a prolonged period of snow and wintry precipitation with temperatures near or below freezing.

The Virginia Department of Transportation is advising people to avoid unnecessary travel so that its crews have room to work treating and plowing roads.

“Stay home and avoid driving throughout the storm,” VDOT said in a 6 a.m. update. “Heavy snow bands will mean reduced visibility and potential for conditions to deteriorate quickly. Should the higher end of forecasts materialize, it will take some time to make a passable lane on all roads.”

👷‍♀️ Give crews time to treat roads
❄️ Clear snow from your ENTIRE car
⌚️ Allow extra time to reach your destination
↔️ Increase your following distance
💡 Use your headlights
🚘 No sudden stops! Brake lightly to keep your tires from slipping pic.twitter.com/kpMqr1UFVF

The Virginia State Police reported earlier this morning that its troopers had already responded to 34 crashes by 9 a.m., though most of the incidents did not result in any injuries and involved only damage to vehicles.

The City of Falls Church activated its snow emergency routes at 9 a.m., prohibiting residents and visitors from parking on several major roads.

“The City’s snow emergency routes need to be open for first responders, public safety officials and road crews at all times and thus have priority for salting, sanding and plowing,” the city said in a press release. “…Vehicles abandoned or parked on snow emergency routes could be ticketed and towed to allow snow removal crews to clear the roads.”

A full list of affected streets can be found in the press release and on the City’s website.

The City says its response to Winter Storm Orlena has not been hampered by recent concerns about COVID-19 that sent the entire Falls Church public works staff into quarantine last week. Plowing in the city is being conducted by a combination of contractors and staff members who were cleared to leave quarantine by the Fairfax County Health Department.