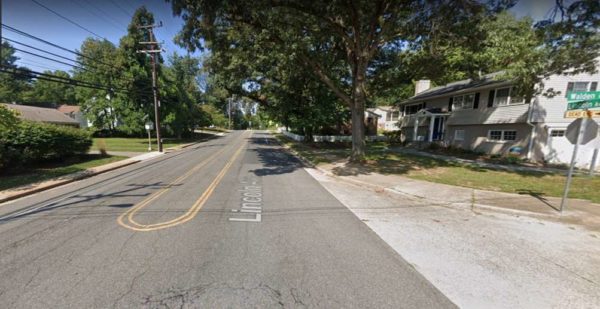 What if Lincoln Avenue looked more like George Mason Drive?

Falls Church Planning Director Paul Stoddard posed that query to the city planning commission when it met on Dec. 16 to demonstrate how a “green streets” concept could improve the look and safety of Falls Church’s roadways.

“It’s a proposal to improve quality of life through urban design,” Stoddard said.

Citing North George Mason Drive in Arlington and MacArthur Boulevard in Washington, D.C., as examples, Stoddard presented rudimentary renderings of what Lincoln Avenue might look like with trees planted in a median and in planters placed at intervals along the sides of the road.

According to Falls Church City planners, Lincoln could accommodate a median with 43 trees that would provide 13,000 square feet of tree canopy when the plants reach maturity.

The avenue also has enough space for 23 trees in planters on the side of the road, which Stoddard says would encourage slower vehicle speeds without interfering with the availability of parking.

As part of his “green-ing” Lincoln Avenue proposal, Stoddard also suggested installing six new marked crosswalks to make it easier and safer for residents to get to the existing sidewalk.

“When you put in crosswalks and trees, the expected outcome is you get an improved look of the neighborhood. You get cooler summer air temperatures, talking about climate resilience,” Stoddard said. “You get improved stormwater management, you get increased pedestrian accessibility, and you get safer, slower auto speeds.” 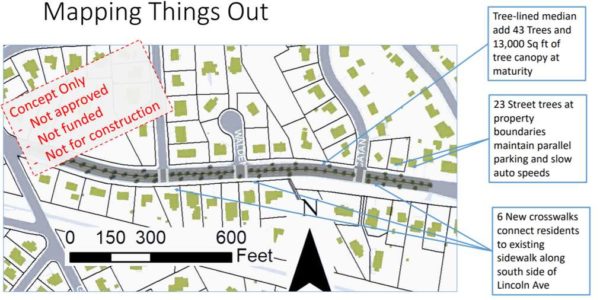 Emphasizing that the concept is just a proposal, not an official project, Stoddard told the Falls Church City Planning Commission that Lincoln Avenue could benefit from a new median and foliage that would address recurring issues with vehicle speeds, pedestrian accessibility, and stormwater management.

Lincoln Avenue is designed for high-speed travel despite passing through residential neighborhoods. Stoddard said that he has heard from residents who avoid using the available on-street parking because passing vehicles go too fast.

Lincoln also only has a sidewalk on its south side right now, even though many of its connecting streets intersect on the north side.

Falls Church added a crosswalk near Yucatan Street in 2017 after residents advocated for more safety measures, and the city had a traffic calming project to update signaling and pavement markings at the N. West Street intersection in 2019.

However, the planning commission seemed to agree with Stoddard that a more expansive approach might be needed at Lincoln Avenue – or potentially other streets in the city.

“This is the kind of thinking you want to see versus speed bumps and bigger storm drains,” Planning Commission Chair Andy Rankin said.

Planning Commissioner Melissa Teates compared the current situation at Lincoln Avenue to what Hillwood Avenue was like before some tree-filled medians were installed there.

“Having that median with the trees, and they kind of bumped out the parking lanes a little bit, it made traffic go a little slower,” Teates said. “…So, I think it would be a good thing for Lincoln to have more trees, to have a median, to have the things that make a street slower and more residential.”

Read more →
More Stories
COVID-19 Cases Continue Climb in Fairfax County As Vaccine Goes LivePoll: How Are You Going to Ring in the New Year?