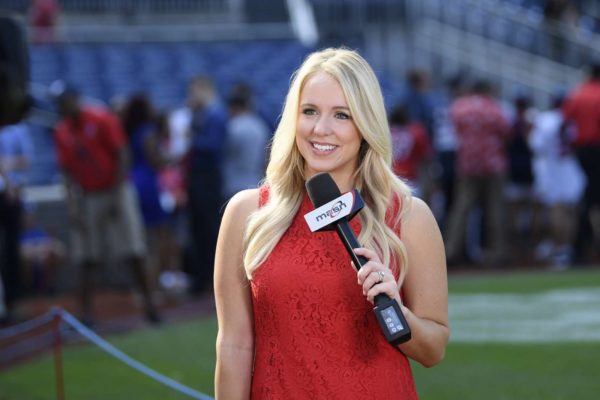 (Updated at 7:15 p.m.) For Alex Chappell, covering the Washington Nationals is both a dream come true and a homecoming.

Now a resident of McLean, the MASN on-field reporter spent her childhood on the other side of the Potomac River in Montgomery County, and she still remembers the thrill that accompanied the news that the Montreal Expos would move to Washington, D.C., in 2005, giving the nation’s capital its own major league baseball team for the first time since 1971.

Growing up, Chappell rooted for the Boston Red Sox, since her father had played in the minor leagues for that organization. However, once the Nationals arrived in D.C., her family quickly adopted them as their favored National League team.

Even over the phone, Chappell’s joy at getting to report on a team that she spent her summers home from college cheering on is unmistakable.

“Getting to go to games at the ballpark, it was just a really special experience, so yeah, to be a fan of the team and now to get to cover them was really, really exciting,” Chappell told Tysons Reporter.

Chappell had her sights set on a career in sports journalism since attending Walt Whitman High School in Bethesda, but her journey to MASN began in earnest when she joined the University of Alabama’s campus radio station.

Drawn to the university for its communications school as well as its reputation as an athletic powerhouse, Chappell gained valuable experience and skills covering Crimson Tide football that she later translated into gigs as a sports reporter for local TV stations, first in Birmingham, Ala., and then in Boston, Mass.

After covering the Tampa Bay Rays for a season in Florida, Chappell got the job she had been waiting for: the chance to return home to report on the Nats.

The opportunity came in 2018 when MASN promoted on-field reporter Dan Kolko to an anchor position. Chappell learned about the rare opening from colleagues at ESPN, where she has been covering college football on a freelance basis for the past four years.

“Working in the media industry, it’s really challenging to ever get the chance to work in your hometown,” Chappell said. “The timing has to be there, the opening has to be there, just almost all the stars have to align, so it was just such an incredible blessing and opportunity.”

Perhaps Chappell brought some of that lucky timing with her when she joined MASN, because her arrival to the network coincided with a mesmerizing season for the Nats that culminated in the franchise’s first-ever World Series victory.

Chappell describes her first couple of months on the job as “chaotic,” as the team got off to an unpromising 19-31 start, and she tried to maintain the energy and positivity expected from an on-field reporter.

That became easier, of course, once the Nats started winning games, transforming a potentially dismal season into the kind of dramatic, against-all-odds postseason run that fuels the dreams of players and fans alike. 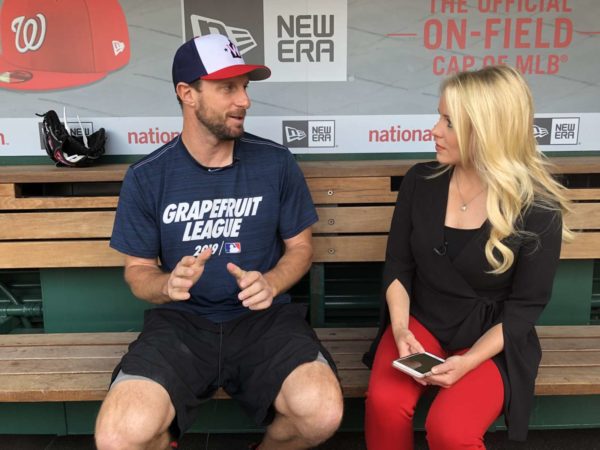 Chappell points to Sept. 3, when the Nats came back with a seven-run ninth inning to beat the New York Mets 11-10, as the moment when she realized how special the season could be.

While she never lost sight of her role as a journalist, she admits that she couldn’t resist getting caught up in the excitement around the Nats, particularly as she got to know the players and their families. She even had a “Baby Shark” pin that she rubbed for good luck before games when covering the team’s division series against the Los Angeles Dodgers for TBS.

“At the end of the day, through and through, I’m a Nats fan at heart, but you do the best you can as a journalist to always be fair,” Chappell said.

If 2019 felt like a fairy tale, then 2020 was a stone-cold return to reality, even if it was not one anyone had ever experienced before, as Major League Baseball attempted to navigate a global pandemic with a truncated season.

Like other reporters, Chappell had to adjust to working from home and conducting interviews exclusively through Zoom, and she says it was “tough” to see the Nats raise their World Series championship banner in July to a stadium empty of fans.

The enthusiasm around the Nats’ 2019 season and the Washington Capitals’ Stanley Cup run the year before was “electric,” Chappell says, recalling grocery store visits where every other customer was decked out in Nats gear and the Capital One tower in Tysons turning red during the playoffs.

The experience helped Chappell fall in love with her adopted home of McLean, where she lives in a townhome with her husband Scott and their two pets, a golden retriever named Harley and a cat named Riley.

“I love our community of McLean, so I’m biased, but I think we’re the best suburb of D.C. now,” Chappell said. “There’s so much to do and amazing restaurants.”