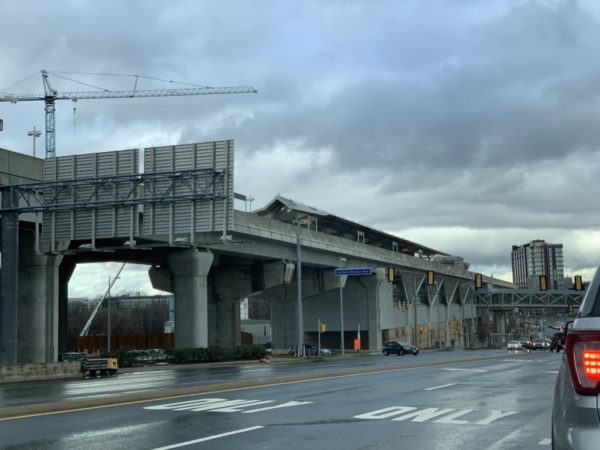 Toll revenues from the Interstate 66 Express Lanes to the tune of $1 million will fund a second entrance to the McLean Metrorail Station.

The plan is to knock down part of a wall in order to add doors and an entrance, Fairfax County Department of Transportation Special Projects Division Chief Martha Coello said.

“It really enhances the ability for people who live or work north of the station to easily access it,” she said. “Hopefully, that gives them greater incentive to use transit, rather than use their own vehicle.”

Fairfax County aims to start work “in the next year or so,” she said.

Using 66 Inside the Beltway toll revenue, the Northern Virginia Transportation Commission awarded money to six “low-cost, low-risk” transit projects as part of its Commuter Choice program for the I-66 corridor, according to an announcement on Thursday (Dec. 10).

Both the scope and timeline of the program are more conservative this year due to a drop in toll revenue caused by the novel coronavirus. Pre-pandemic, Commuter Choice anticipated getting $25 million in grant funding for the 2021-22 fiscal year. Instead, tolled trips dropped by nearly 50%.

The announcement called Fairfax County’s application the strongest out of the six projects, which will receive a total of $3.5 million. Other picks included renewing service for three “existing, high-performing express bus services” and converting parts of one lane of Lee Highway in Arlington into a bus and HOV-only lane.

Staff picked this batch of projects because it “minimizes the risk around the uncertainty of a return to pre-pandemic traffic volumes and makes the best use of the minimal available toll revenues,” NVTC says.

According to Commuter Choice, the program has enough money saved from previous years to continue existing projects and fund new projects.

Coello said the McLean Metro Station project “is a bit unusual” in that it was not formally part of a capital improvements plan, but rather, arose during a rezoning application from Capital One in 2012.

Working with the Washington Metropolitan Area Transit Authority, a team from Capital One designed the entrance, she said. The county received the exact amount it applied for, but Capital One has pledged to contribute to overages.

Coello says Fairfax County has been waiting for the right time to develop the site. Back in 2012, the change was not urgent enough to justify spending the money.

“Having an opportunity like Commuter Choice, this was kind of a golden opportunity,” she said. “It was a case of the right place, right time, right pieces falling in place.”

Since the Commonwealth of Virginia and NVTC established the program in 2017, Commuter Choice has provided more than $60 million grant funding to 36 projects in Northern Virginia.