Officials say they considered several options and eliminated some when they determined that they would produce new overcrowding problems or create infrastructure or transportation issues.

Overcrowding has been a persistent concern at McLean throughout the past decade, as the school’s student population ballooned from 1,863 people in the fall of 2009 to over 2,000 people by 2012.

Despite several limited attempts to add space over the years, including the addition of temporary classrooms and the removal of lockers from hallways, FCPS says McLean High School is now at 118% capacity with 2,350 students in a building designed for 1,993 – a “substantial” deficit.

In comparison, Langley High School currently has 1,972 students and can accommodate 2,370 students after finishing a renovation last year. 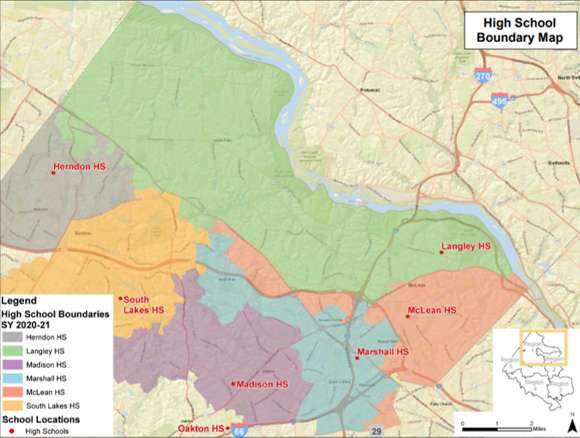 FCPS has been exploring a possible boundary change for the two schools since early 2019. Feedback from a pair of community meetings in December 2019 led the Fairfax County School Board to add Cooper and Longfellow middle schools to the study’s scope on Mar. 9.

Longfellow Middle School is currently at 97% capacity with 1,334 students in a building for 1,374 students, though it is projected to exceed capacity going forward. Cooper Middle School has 992 students and will expand its capacity to 1,120 students after a renovation is completed around 2023.

Here are the three potential boundary adjustments that FCPS presented:

FCPS officials also included an option for no boundary change. Projections show that both McLean and Longfellow will be over capacity for the foreseeable future, whereas Langley’s enrollment will drop to 1,855 students, or 78% of its capacity, in 2024.

With any boundary adjustment not expected to take effect until the start of the 2021-22 school year, FCPS is installing a modular with 12 classrooms at McLean High School to provide temporary capacity relief, though it will still be at 103% capacity. The school will also still have six temporary classrooms.

Dates for FCPS staff to deliver a recommendation to the Fairfax County School Board and for the board to take action after holding a public hearing have not yet been determined.