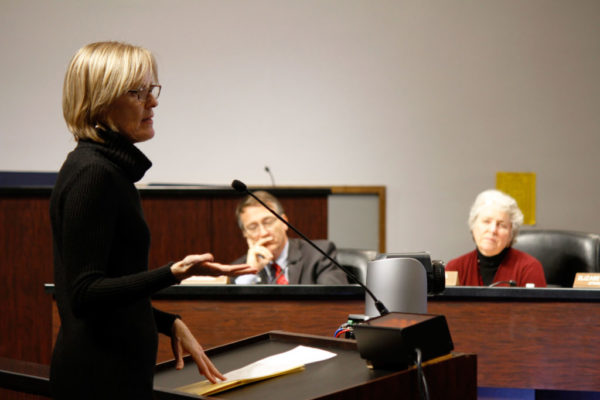 It’s true that McLean High School is overcrowded, but following last night’s School Board public hearing on the Capital Improvement Plan (CIP), Dranesville District Representative Jane Strauss says plans are in the works to relieve some of the pressure.

The CIP shows McLean High School currently at 114 percent capacity, with projections sending that up to 127 percent by 2022.

Strauss said that she has been in discussion with members of the community about adjusting the school boundaries to relocate some of the older, multi-family units to other schools. With an extensive renovation project just wrapping up in October and a school capacity utilization at 82 percent, Strauss said Langley High School is the best option for relocation.

“We’ve been talking with the community about this for years,” said Strauss. “We had to wait for the Langley High renovations to finish, but now is the time to begin talking about boundary changes.”

Strauss said shifting boundaries to send students to Langley High School and Cooper Middle School is essential, not only to relieve the current overcrowding, but to prepare for the incoming developments along the Silver Line.

In addition to the changes at the high and middle school levels, Strauss said she plans to propose adding classrooms to Franklin Sherman Elementary School. Franklin Sherman, Strauss said, is the last property in the area that has space to expand without needing zoning changes.

In the long-term, though, Strauss said McLean will need the new elementary schools at Pimmit Hills and Tysons to help deal with long-term population growth fueled by new development. Plans for the schools are in the CIP, but are still years away.

At the hearing, parents from McLean and other schools throughout Fairfax urged border adjustments to offset overcrowding.

“The current enrollment at McLean is 2,255, with a program capacity of 1,983,” said Susan Garrahan, a Langley High School alum with a daughter at McLean High School. “This equates to 14 percent over capacity. The forecast in the draft CIP shows that in the last two years of this five-year plan, McLean will be the most overcrowded high school in the county at 26 to 27 percent over capacity.”

Garrahan said development along the Silver Line will likely continue to bring families with school children into the McLean-area schools.

“Given current conditions and your forecast of serious overcrowding, I was startled to see no concrete proposals to address this situation in this year’s CIP,” said Garrahan. “I have read about your efforts to revise the policies and procedures for boundary adjustments.  This makes me concerned that McLean will get stuck in a holding pattern, overcrowded while procedural matters get ironed out.”

The school newspaper’s October edition described the school overcrowding as leaving students stuffed three to a seat on school buses and teachers traveling with a cart full of supplies because of limited classroom space.

“I ask the board to have the courage to look at school boundaries,” said Keith Foxx, an FCPS parent. “Several reports developed by the School Board mention this as an option, usually at the bottom because it’s not popular. Let’s stop kicking the can down the road, we’re going to have to deal with this.”

On Jan. 17, the McLean High School PTSA will host a meeting in the Lecture Hall with Strauss and Kevin Sneed, a school planner, to discuss the plans to address school overcrowding.