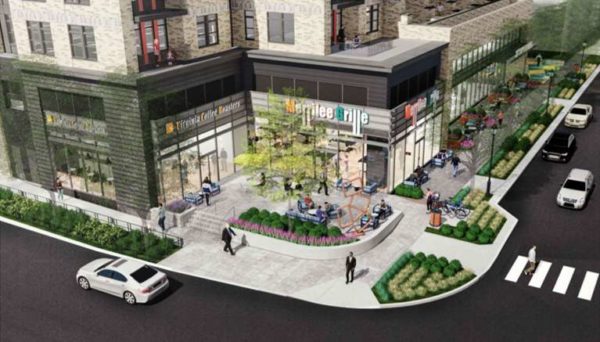 The Fairfax County Planning Commission unanimously agreed to defer its vote on the mixed-use development planned for Merrilee Drive after holding a public hearing on Wednesday (Dec. 2).

The planning commission will now decide whether to support the rezoning application for the project from Elm Street Development on Dec. 9.

Though he expressed support for the project, Providence District Planning Commissioner Phil Niedzielski-Eichner moved to push the decision back by a week after he and other members of the commission raised questions about the availability of park space in the development.

Located at 2722 Merrilee Drive on a site currently occupied by an office building, Elm Street’s project will feature 20,000 total square feet of open space, including a 0.17-acre public park space along the front of the building, two corner pocket parks, and a private dog park for residents, according to a county staff report.

However, the proposal still falls 0.45 acres short of the on-site park space that Fairfax County expects for developments in the Tysons area, including the Merrifield Suburban Center where the Merrilee project is situated.

“This is an exciting next opportunity to continue developing in the Merrifield area and to help more fully realize the suburban center vision for Merrifield,” Niedzielski-Eichner said. “…I think you’ll agree that the park issues, particularly toward the end of the process, were particularly challenging to realize.”

Fairfax County Senior Planner Kelly Posusney says the failure to meet that standard was the biggest issue with Elm Street’s application when it was accepted for review in March.

County planning staff worked with Elm Street to add as much on-site park space as possible, but they ultimately reached the limit of what they could provide without adding height to the building or other undesired elements.

“Given the size of the development and the type of building, they just couldn’t do any more in terms of meeting the park need,” Fairfax County Park Authority Development Review Chief Andi Dorlester said.

The comprehensive plan does offer alternatives for projects that fall short of the urban park standard. Developers can provide at least 0.45 acres of off-site, publicly accessible parkland. If they are unable to find off-site park space, they can contribute $500,000 to the park authority for the future acquisition and development of park resources in the Merrifield Suburban Center.

According to McGuireWoods managing partner Greg Riegle, who represented Elm Street at the planning commission public hearing, the developer is now looking for properties that could be turned into park space and has committed to contributing $500,000 if the land isn’t found.

When Braddock District Planning Commissioner Mary Cortina expressed concern that the money would end up sitting unused in an escrow or proffer account, Riegle emphasized that the developer’s “strong preference” is to find park space, potentially by combining resources with other land owners as other development applications for the area come in.

“I think time is our friend,” Riegle said. “We’ve got a lot of good leadership in Merrifield and the Providence District, and we’re committed to finding a solution for all the reasons you stated.”