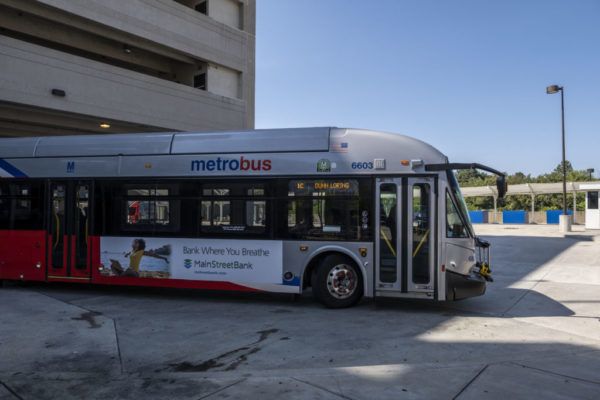 Metrorail and Metrobus users in Fairfax County may be seeing service changes next year.

Proposed by Washington Metropolitan Area Transit Authority staff to help close a $176.5 million-gap in the budget for this fiscal year, the changes span management actions to service changes to deferred capital projects. WMATA staff say the Silver Line expansion will not be impacted.

The proposed budget revisions are currently under review and will be voted on by the WMATA Board of Directors this Thursday (Nov. 19).

This deficit is mostly a result of an 80% reduction in revenue from ridership, WMATA Virginia Government Relations Officer Gregory Potts told the Greater Tysons Citizens Coalition during a meeting on Nov. 12.

The Metro saw a 90% drop in ridership across the board, including Tysons, Potts said. The declines in train and bus usage began in mid-March due to the COVID-19 pandemic, and they persist today.

Nine months into the pandemic, Metrobus ridership is down by 60%, a slight recovery from the 80% drop seen earlier in the year. That change can be partly attributed to the number of essential workers who may not be able to afford a car but still need to get to their jobs, Potts said. 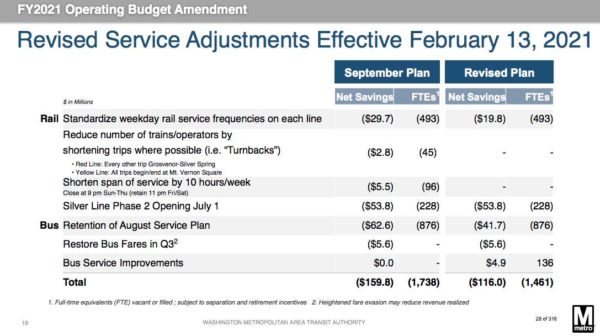 “It’s been pretty eye-opening to us how important the bus is to the region,” Potts said. “Sometimes rail gets all the attention, but the bus system is really important to a lot of individuals. It’s an equity issue for us.”

WMATA staff are recommending Board members vote to authorize management actions and save $30.5 million, to defer non-safety related capital projects and save $30 million, and to make service reductions amounting to $116 million in savings.

The cuts could have been worse. A first draft of the plan released in September had more changes and cuts, because the deficit was projected to be $212 million. The plan was revised after WMATA opened up the plan for public comment, pushed its CARES Act money further, and found additional savings in operating costs.

WMATA initially projected the $546 million it received from the CARES Act would only last through 2020, but the agency now says it will stretch until March 2021. It also saved $35.5 million that would have paid for overtime, fuel, utilities and other costs.

Despite public objection to some reductions in services, a few bus lines that have been suspended in Fairfax County will remain on hold under WMATA’s updated budget plan. 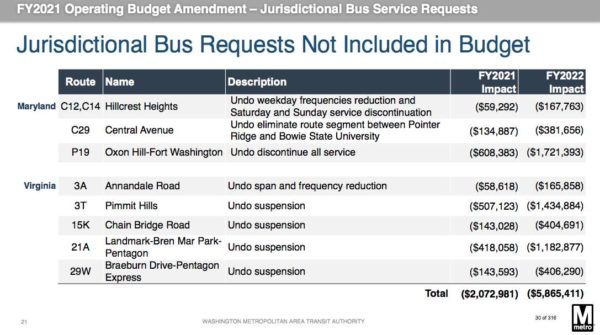 It is hard to pinpoint when transit rates could return, Potts said.

“If you’re talking about pre-COVID-19 rates or more generally, some talk of ‘normalcy,’ where there are people wearing masks but more people riding, for transit, there will be an impact for longer than we want to imagine right now,” Potts said.

Currently, WMATA cleans buses, trains, and high touch-points daily, and it disinfects on demand with an electrostatic fogger machine, he said. Staff are providing riders with masks. Bus riders board from the back and the operators are protected by plastic shields.

Earlier this year, the Metro board approved a six-month deferral of the fare changes that will last through November.

To eliminate contact with employees, WMATA launched a SmartTrip app for Apple in September that enables contactless mobile fare payment. An Android app will be available by the end of the year, according to Potts.

“That’s good for convenience and safety,” he said.

Despite initial concerns about people contracting the novel coronavirus while using public transit, some preliminary studies internationally have demonstrated that “transit has not been known to be a transmitter in the way that other facilities may be,” Potts said.

Another positive development is that platform renovations to improve safety and accessibility at the Metrorail stations in Vienna, Dunn Loring, East Falls Church, and West Falls Church were completed on time.

“We’ve finished 10 platforms in the last year and a half,” Potts said. “It’s really moving along well. With the pandemic, they could actually maintain their schedule.”