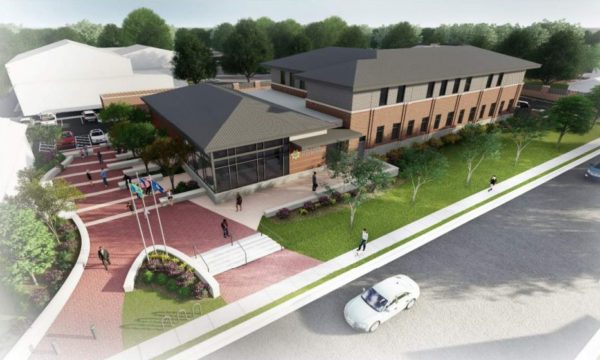 Construction on a new facility for the Vienna Police Department appears on track to start this December, Vienna Police Chief Jim Morris told the Town of Vienna Planning Commission on Wednesday (Oct. 14).

With the bidding process for a contractor to construct the new station at 215 Center Street S. now complete, the Vienna Town Council will select a winning bidder during its regular meeting on Oct. 26.

Given that timeline, Morris says he anticipates that police department staff will start transitioning out of the existing station and into a temporary facility in the former Faith Baptist Church at 301 Center Street S. within the next 60 days.

“Between now and December, we’re going to slowly be migrating over into the facility,” Morris said, citing information technology needs as the primary challenge for preparing the temporary space.

The Town of Vienna purchased the three-acre Faith Baptist Church property for $5.5 million on Sept. 18 with the goal of converting it into a public facility. Initially, the building will serve as temporary office space for the police department, but the town has not yet settled on a long-term plan for the site.

As part of the 2232 Review process required for proposed public facilities, the Vienna Planning Commission voted on Wednesday to affirm that the proposed use of 301 Center Street S. is in accordance with the town’s comprehensive plan, which the town council amended on Oct. 5 to designate the property for governmental use instead of institutional use.

The planning commission also recommended that the Board of Zoning Appeals approve a conditional use permit for the site so that the police department can utilize it as a temporary facility.

The zoning appeals board’s next meeting is scheduled for Oct. 21.

According to Michael D’Orazio, Vienna’s deputy director of planning and zoning, the police department is planning to primarily use the former church property as office space with a maximum of 15 employees working there at any given time.

The facility will be open 24 hours a day, seven days a week to police staff, with members of the public permitted on Mondays through Fridays by appointment. About 35 parking spaces in the existing church lot will be sectioned off for the police department, both for police vehicles and the staff’s personal vehicles.

Morris says the building at 301 Center Street has definite advantages over the Beulah Road property that Vienna had originally envisioned serving as a temporary facility while the new police station is under construction.

In addition to having more space, the Faith Baptist Church building has two floors so that the police department can set up administrative offices and other rooms accessible to the public on the ground level, while reserving the second floor for functions just for police officers and staff, such as changing rooms, a rest area, and space for roll call, meals, and report writing.

The church also has a gymnasium that can hold fitness equipment for police officers.

“We were very relieved when this space became available,” Morris said.