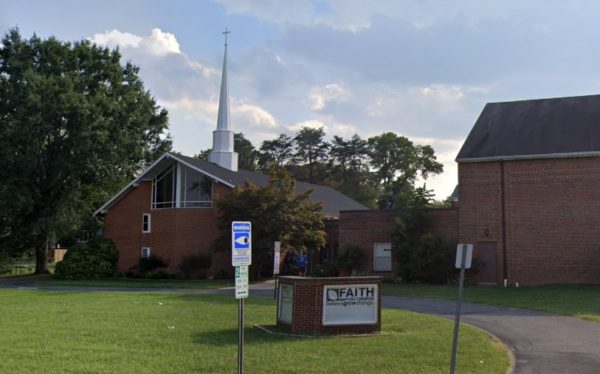 The Town of Vienna announced plans to buy the Faith Baptist Church — and now wants residents’ input on what to do with the property.

The Vienna Town Council last night (Monday) approved buying the 3-acre property at 301 Center Street S. for $5.5 million after councilmembers lauded the upcoming acquisition as a long-term benefit to the community.

Councilmember Chuck Anderson called the purchase a “once in a lifetime opportunity,” saying that the church is in the core governmental area of Vienna.

“Center Street is literally in the center of town,” Mayor Linda Colbert said.

Town Attorney Steve Briglia said that the church — a “vital and established part of the town for many, many years” — started internal discussions about changing its mission and possibly selling the property a few years ago.

Previous Town Councils were interested in buying the property, but the church wasn’t ready to sell it, Briglia said. The town is scheduled to close on the property on Sept. 18, using funds from the general obligation bonds issued earlier this year for the purchase, according to a press release from the town.

The town plans to rent the space to the church while the church makes its transitions.

“I’m sure it’s bittersweet whenever a house of faith decides to move into a new way of operating and I certainly wish them the best of success in the future,” Anderson said.

In the short-term, the town is looking to temporarily relocate the police department to the church for one to two years while the new station is under construction.

Police Chief Jim Morris said that the church — instead of the originally planned relocation to the town’s Beulah Road property, will allow the police station to have business hours. “People can come in and we’ll still remain in the community in the heart of all of the activity,” Morris said.

How the property will get used in the long-term is still to be determined. The building includes classrooms, a sanctuary and a full-size gym, Briglia said.

Councilmember Nisha Patel urged residents to share their ideas for how the property can get used. “It’s your property, and as town residents, I really hope you guys provide us with feedback about you’d like to see go into that space eventually and after its temporary use,” Patel said.

Colbert said that the town will do a feasibility study to help figure out how the property can get used. The Vienna Town Council will also start discussing the options during its Capital Improvement Plan work session on Sept. 21, according to the press release.