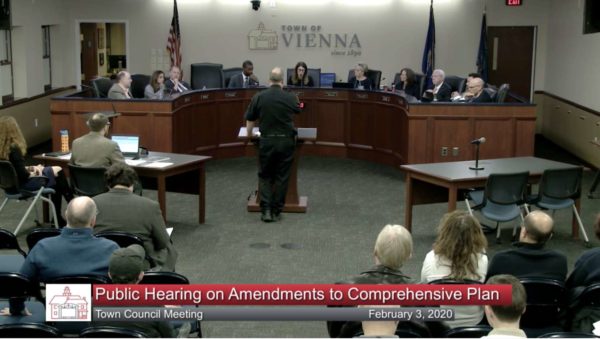 The future home of the temporary police station was a hot-button topic at the Vienna Town Council meeting last Monday (Jan. 3).

At the meeting, Morris addressed concern from the public, quelling fears that traffic would increase on Locust Street since the facility will not be open to the public — therefore no added traffic will be coming to the area.

People arrested around the town will be brought to another facility, and people with walk-in complaints will be directed to another office.

Other major concerns about the property included stormwater management, which has historically been an issue on the property, according to councilmembers.

“I can never go on [the] record saying we are going to fix the issue,” Morris said, adding that the stormwater plan is a larger issue. Morris did say that they will do their best to manage the problem.

Michael Gallagher, the director of public works in Vienna, said at the meeting that improvements with the water drainage system at 114 Locust Street SW could also improve the stormwater management system for adjacent lots depending on the slant and placement.

“Secure parking is critical — I know someone tried to bomb police cars years ago,” he said at the meeting.

Now, the police department will be meeting with the town’s Planning Commission to discuss plans before bringing finalized documents back to the council.

“We are already moving forward with planning and zoning,” Morris said, adding that representatives from the police station have a work session scheduled for tomorrow (Wednesday, Feb. 12). Morris said he also met with planners last Friday (Feb. 7).

Plans are already 80-90% complete, according to Morris, who added that there is still room for input from interest groups, such as neighbors to the property and councilmembers.

Town councilmembers, including Douglas Noble, expressed concern that the plans might be getting ahead of themselves before going through the proper public scrutiny.

“I want to make sure there is enough slack in the schedule,” Noble said.