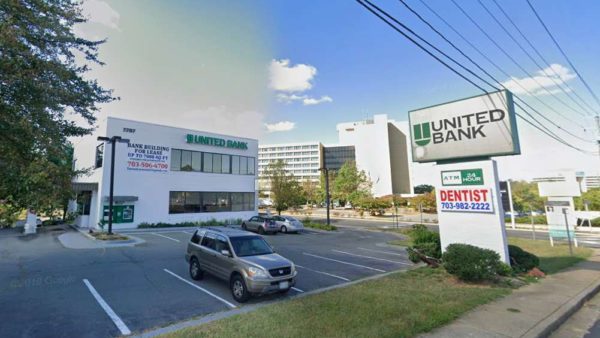 A new cafe could be coming to a former drive-thru United Bank at 7787 Leesburg Pike.

Applicant Mohamed Rafaei is seeking a permit from the Board of Supervisors on Tuesday, Sept. 15, to convert the first floor of the building (built in 1980) into a restaurant.

“The proposed sit-down restaurant will replace the first-floor financial institution,” a report on the project noted. “The proposed hours of operation for the restaurant are 11:30 a.m. to 1:30 a.m., 7 days a week. Approximately 4 employees and a maximum of 72 patrons are proposed.”

The application noted that the second floor of the building is currently an office, which would continue to be in use after the restaurant change. Given that the site is zoned for office buildings and hotels, a special exception is required for a restaurant use, but a staff report said the restaurant could support the surrounding offices and is “in harmony” with the Comprehensive Plan.

There was once a local Tysons establishment called Mint at 8346 Leesburg Pike, next to the former Tysons Biergarten, but it’s unclear if the two are related.