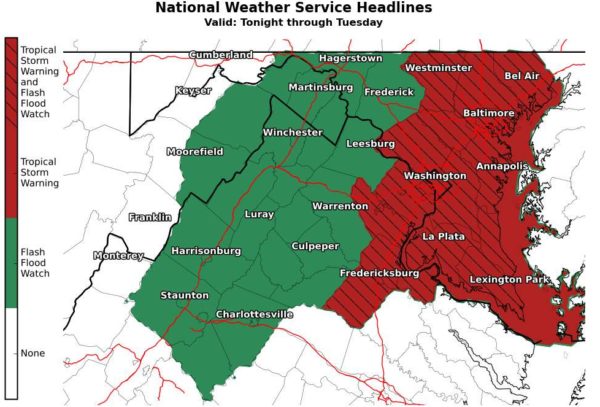 Ahead of Tropical Storm Isaias hitting the D.C. region, Fairfax County officials and forecasters are sharing resources and tips to help people prepare for the storm.

“Significant flash flooding of small streams and creeks is likely tonight into Tuesday evening as rainfall associated with Tropical Storm Isaias spreads northward,” according to Fairfax County. Forecasters predict that the storm will bring 3-6 inches of rain.

Currently, the Tysons area is under a Tropical Storm Warning, which means that tropical storm-force winds are expected somewhere within this area within the next 36 hours,” according to National Weather Service.

The area will be under a Flash Flood Watch from 11 p.m. tonight to the same time Tuesday night and a Coastal Flood Watch will also be in effect from Tuesday morning to Wednesday.

Due to flooding risks, Fairfax County officials are reminding drivers to turn around if they see water and don’t know how deep it is. The county also tweeted out contact information for the appropriate people to call if someone spots a downed tree.

The Washington Post’s Capital Weather Gang tweeted that waves of heavy rain are expected to hit the D.C. region by Tuesday morning and that commuters should allow for extra time.

#Isaias and DC-MD-VA! Short thread…
* Tropical storm and flash flood watch out for large parts of the region
* High confidence in heavy rain. NWS has INCREASED our rain forecast to 4-6" along I-95 corridor, 2-4" to west, 5 to 7" east. (1/x) pic.twitter.com/en6NftxHD2