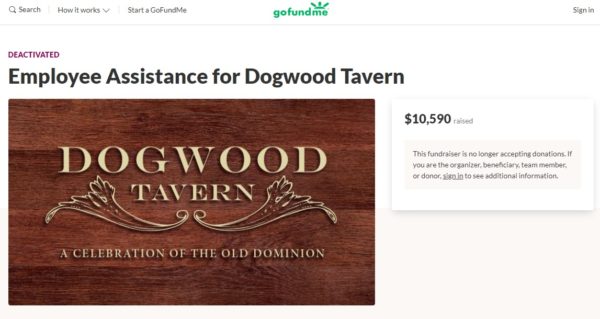 Owners and staff at Tysons-area restaurants have turned to fundraisers to help combat the financial hardships due to the coronavirus pandemic.

As of today, 15 GoFundMe fundraisers have raised a total of $236,110. Some of the fundraisers support employees, while others focus on the restaurants’ operations. Erica Hoffman, the co-owner of Galaxy Hut & Spacebar, created fundraisers for both staff and business operations.

The employee relief fund for Bottleneck Management, which operates now-closed City Works, raised the most out of the 15 fundraisers with more than $61,000.

Most of the fundraisers are still active, but a few, like the ones for Bear Branch Tavern in Vienna and Dogwood Tavern in Falls Church, are no longer accepting donations.

Tysons Reporter chronicled the local restaurant fundraisers that popped up on GoFundMe in March and April.

Here are the fundraisers — alphabetical by the restaurant names — still accepting donations:

Don’t see a restaurant’s fundraiser on the list? Email the link to [email protected] so we can add it.