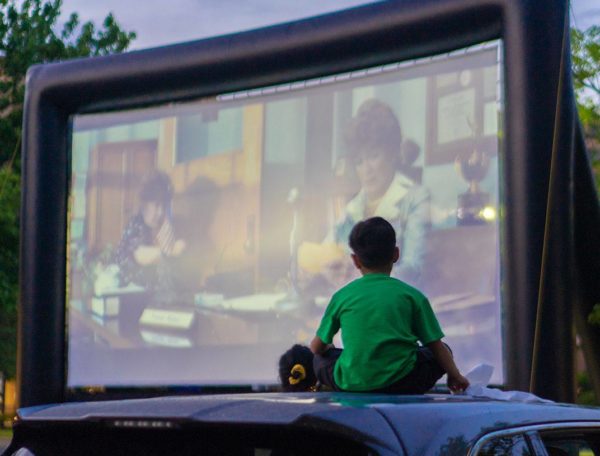 The “Tysons After Dark” series highlights different activities that keep people busy once the sun goes down.

Movie-goers have three different drive-in movie options this summer in the Tysons area.

The various screenings recommend that people get their tickets sooner rather than later due to limited capacity. Here’s where people can find the drive-in movies and which dates still have tickets available.

Tonight, drive-in movies kick off at the Mosaic District with “Captain Marvel.”

People must stay in their vehicles on the seventh floor of the Market parking lot to watch the movies, which will have captions and audio via an FM transmitter on the radio. Movie-theater inspired fare from Alta Strada will be available to order.

While tickets have sold out for tonight’s show and the double feature — “Toy Story 4” and “Jurassic Park” — on Friday, July 24, tickets have not gone on sale for the yet-to-be-announced films on Friday, Aug. 28.

Last week, The Boro started off its four-week-long screenings with “Dreamgirls.” The drive-in at The Boro has a pedestrian-only section along with spaces for cars and offers extended restaurant outdoor seating and live entertainment.

“The entire series is sold out, but we are opening a limited number of spots to each upcoming movie at 9 a.m. tomorrow morning!” a post on The Boro’s Facebook page said on Tuesday. Tysons Reporter previously wrote about the full line-up of family-friendly films.

Capital One Center will soon have drive-in movies from July 11 to Aug. 2 to fundraise for Second Story, a local nonprofit that helps people seeking food, shelter and emergency support.

While the movies at the McLean Metro lot (1820 Dolley Madison Blvd) are free, Capital One is asking people to make a $25 donation when they register.

“How to Train Your Dragon,” which is the series’ first movie on Saturday, July 11, still has available slots. The movies for July 12 ad July 18-19 are sold out.

Registration will open on July 13 for:

Food will be available from Curbside Kitchen. Movie-goers must stay in their vehicles.