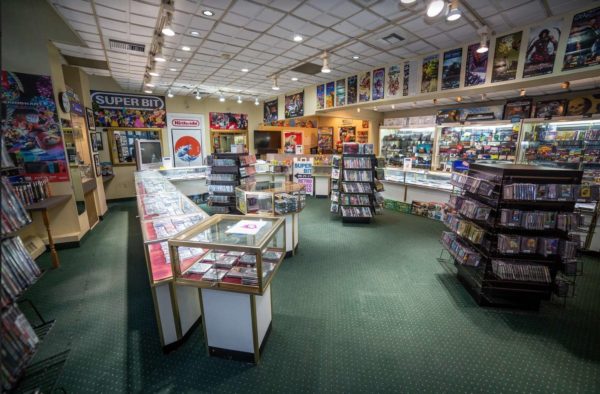 After the coronavirus pandemic altered plans to open Super Bit Video Games, owner Chris Jackson decided to temporarily shift his model so he could safely supply customers with video games and toys.

Instead of inviting people into the store (101 E. Broad Street), which sells retro video games and other similar items, Jackson said he set up a curbside pick-up system so customers could limit in-person contact.

“We were pretty much in a bad spot,” he said but added that between pick-up options, eBay sales and Instagram advertising, the business still ended up being sustainable.

Now, two weeks after customers have finally been welcomed into the store, sales have “substantially” picked up, according to Jackson.

“It’s been awesome to finally get to meet these people,” Jackson said. “The first two weeks have been outstanding.”

Though people were still stopping by for curbside pickup, many customers were awaiting the day when they could visit the interior of the store, he said.

“A lot of the people coming by seem to understand who we are and what we do,” he said. “Because of that, we have a good chance of this level of interest being maintained over a period of time.”

Since people aren’t really out-and-about like they used to be before COVID, Jackson also expects foot traffic to pick up in several months.

As a “destination retail location,” Jackson sees customers stopping by from all over the greater D.C. area, including Falls Church, Vienna, Arlington and even Maryland.

Because the store wasn’t open before the pandemic, Jackson isn’t sure if sales picked up because of quarantine boredom, but he did say the community seemed very supportive on social media before the pandemic hit Northern Virginia.

“One of the biggest reasons I wanted to open this place was to provide a place for the retro gaming community,” he said. “There aren’t a lot of places in this area that do this.”

Bestsellers so far, according to Jackson, include older Nintendo gaming systems along with GoldenEye, Super Mario 64 and even Sega systems, which he said he grew up with.

To keep customers safe, Jackson requests that customers wear masks and social distance while they browse.

“So far everyone has been great with that stuff,” he said, adding that they allow roughly four people maximum in the shop at any one time.

If people want to check out the shop, they can visit Wednesday-Saturday from 10 a.m. until 6 p.m. and Sundays from noon until 5 p.m. The shop is closed Mondays and Tuesdays.