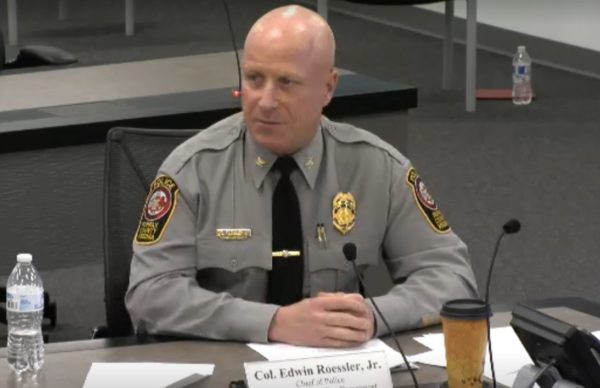 At a meeting with county officials today (Tuesday), Roessler stated that FCPD’s policies surrounding use of force, the use of chokeholds, and de-escalation are well ahead of many reforms requested by protestors across the country.

Currently, chokeholds are not allowed as a use of force options. De-escalation is required when possible and officers are trained two times per year in order to reinforce the use of force continuum and training. Shooting at moving vehicles is prohibited unless there is a “threat of death or serious injury” to the officer or another person, according to police documents.

“These reform endeavors have not ended as we continue told ourselves accountable,” he said.

FCPD’s use of force policy aims to gain voluntary compliance from the other person using seven core pillars, which include principles like self-control, empathy, balance, realism, and a commitment to lack of humiliation.

A study on FCPD’s use of force culture is underway. The report, which is conducted by the University of Texas at San Antonio researchers, was prompted by another study that found roughly 40 percent of all use-of-force incidents involved Black individuals.

Earlier the month, FCPD officer Tyler Timberlake was charged on three counts of assault and battery in what FCPD said was an “unacceptable” use of force.

The county is currently working on implementing a county-wide body-worn camera program. Although the Reston District Station and three other stations have body-worn cameras, the full implementation of the program was delayed due to budgetary concerns.

Recent events, including the killing of George Floyd, have prompted the board to expedite funding for the program. An updated plan will be developed by the end of the month, according to FCPD.

FCPD is also testing a new technology that would automatically turn on the body-worn camera when an officer takes a gun out of the holster.

Major Paul Cleveland noted that the department follows a co-produced policing model, which relies on community support and input to develop policing practices in line with community expectations.

Currently, the police department is taking a look at ensuring its internal culture emphasizes the well-being of officers and de-escalatory practices.

He says FCPD will continue to monitor ways to improve its practices.

“Reform is the right way to go,” he said.