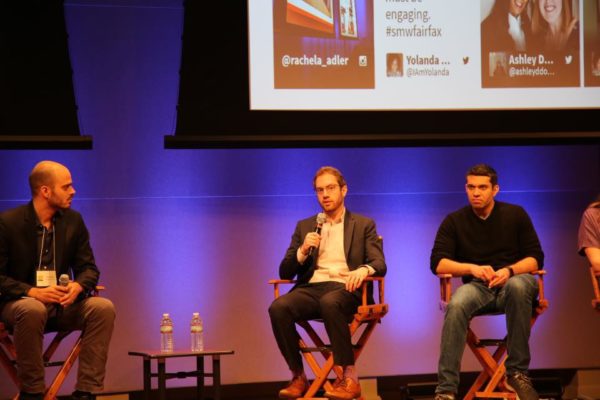 A new Tysons tech startup imagines a world where people can pay for goods and check into their favorite fitness studio with a smile.

Yombu, a biometrics and “identity management” company, is already working with more than 350 businesses around the world to manage the way clients check-in their patrons and manage payments using fingerprint identification, facial recognition and similar biometrics, according to Derek Sanford, the CEO and one of the company’s three co-founders.

Biometrics, according to the Department of Homeland Security, are defined as unique physical traits that can identify a person and are already used by government agencies like at immigration checkpoints.

Instead of governmental uses, Yombu is trying to set up a system where users won’t have to go through the process of setting up new accounts every time someone visits a different salon or a new service.

With the software, people can be identified by their biometrics and auto-populate basic information with a tap of a finger or glance at a camera.

“You have to fill out your name, birth date and all of that information every single time. With our system, you can just access your account and repopulate all of that,” he said.

The founding trio settled on Tysons as a headquarter because a lot of the team was already located in the Northern Virginia area and happened upon a co-working space at 1751 Pinnacle Drive they liked.

Since its founding roughly five years ago, Yombu recently partnered with Mindbody, a California based scheduling company, to serve fitness centers and spas to help with digitization services.

Part of the reason Yombu has been successful, according to Sanford, is because of the growing trend to declutter front desks and modernize a hassle-free check-in process.

“It’s where everyone really wants to go. There’s a lot of systems out there, but not a lot of cohesion,” he said, adding that many systems don’t work well together and people don’t want to see printers and clutter on a desk.

Instead, Yombu’s leadership sees a future where a check-in desk involves a computer and tablet to the side.

Though the company has “fingers in a lot of different pies,” Sanford told Tysons Reporter that it is ahead of competing companies because the team is willing to reiterate products, push forward to meet ever-changing demand and blend several services into one package.

As the company looks to the future, Sanford said that the company is putting a heavy emphasis on facial recognition, since customers seem to be requesting it at a higher rate. With the rise of COVID-19, people will be less inclined to touch communal surfaces in the future, he added.

“Fingerprint is tried and true, fast and cost-effective, but a lot of people were asking about facial recognition,” Sanford said.

For people who are concerned about security in an increasingly digital world, Sanford said the company doesn’t sell any personal data and closely follows the European Union’s General Data Protection Regulations, which he thinks are stricter than regulations in the United States.

People have control over their own data, he said: “If they want to delete their data or change it, that’s their prerogative.”

In the next several years, Sanford said he hopes Yombu becomes worth billions of dollars and focuses on innovating to help consumers and build alliances with partners.