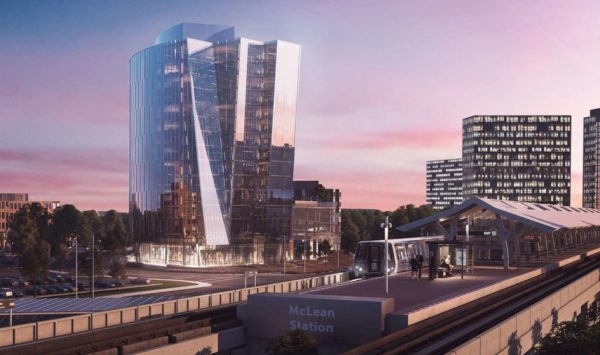 The Fairfax County Board of Supervisors plans to tackle traffic problems along Old Meadow Road as the Tysons One East project advances.

Yesterday, the board approved a rezoning request to increase the floor area ratio for a planned office tower near the McLean Metro station.

Akridge and the Ronald D. Paul Companies are plan to develop 1690 Old Meadow Road, a triangular spot between Dolley Madison Blvd and the Old Meadow Road, into a 15-story tower with Class A offices, restaurant, retail space, parking podium and outdoor terrace.

The development was held up by the acquisition of a public right-of-way.

“This application was filed on land area inclusive of VDOT right-of-way which was in the process of being acquired by the applicant,” according to county documents. “While VDOT on behalf of the Commonwealth concurred in the filing of the application, they generally will not sign the proffers, and would not in this case.”

Now that the right-of-way woes have been resolved, the county, developers and residents are trying to find ways to change the Old Meadow Road.

Scott Adams, the attorney with McGuireWoods who is representing the developer, said that the project includes a proffer for a traffic signal improvement at Colshire Meadow Drive and funds to build and improve roads in Tysons.

Amy Tozzi with the Old Meadow Coalition told the county officials during the public hearing yesterday that nearby residents have traffic and safety concerns that they worry won’t get addressed by the project.

“We understand all development is messy, but it shouldn’t imperil existing communities,” she said.

In response to Tozzi, Adams said that issues with the grid of streets in Tysons and accessing Old Meadow Road from Route 123 are too large for the project to address.

“Some of the concerns that they have are broader in scope than the smaller application we have,” he said.

As part of the board’s approval, county staff will work to create a plan to speed up transportation improvements to calm traffic along Old Meadow Road.

The changes could include:

“In identifying improvements and solutions, staff should coordinate with stakeholders on Old Meadow Road, including residents and business owners and property owners,” according to county documents.

Image via One Tysons East