Three Vienna residents, who want to put the town on the map for foodies, decided to create Vienna VA Foodies on social media, which have since attracted the attention of thousands of people.

Founders Lydia Russo, Christopher Drinkuth and Katherine Drinkuth first came up with the idea to create a Facebook group to bring together food lovers while chatting at the annual Taste of Vienna event last year, Russo told Tysons Reporter.

“Chris, Katherine and I would join together and give our reviews on who was our favorite vendor, which item we enjoyed the most, and thus, we were inspired to create Vienna VA Foodies as a project to work on in our free time,” Russo said.

Vienna VA Foodies, which has more than 2,000 followers on Facebook and an active commenter base, began roughly six months ago. The Instagram account, which has roughly 340 followers, only began in January after the trio decided to expand their outreach efforts. 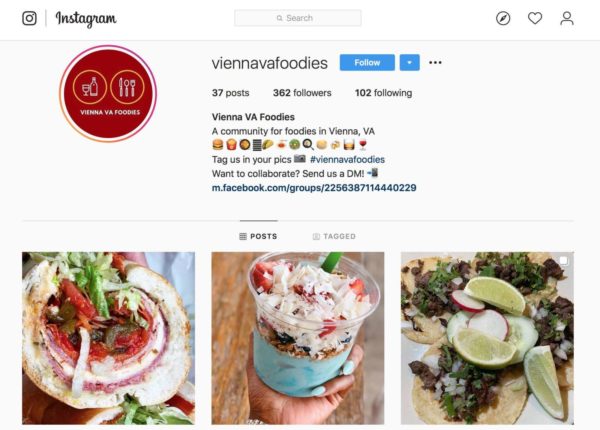 “The members — consisting of Vienna citizens and neighbors — are frequently posting local happenings, their personal restaurant reviews and even crowdsourcing answers to questions about restaurants that cater to their diet needs,” Russo said, adding that the three founders usually just act as moderators.

As a Taste of Vienna volunteer and local real estate agent, Russo said she wanted to help her community celebrate the “vibrant food scene.”

Currently, the group doesn’t plan to monetize the Facebook or Instagram pages for their personal gain, according to Russo, who said the group often relies on donations and giveaways from restaurants or bars who want to promote themselves in the group.

Just last week, the Chick-Fil-A in Vienna partnered with the group to give away eight prizes to people who commented on a post within the Vienna VA Foodies Facebook group after doing other giveaways throughout town the same day.

As a realtor, Russo said she often uses the food scene in Vienna to convince people to buy real estate in the area and thinks the social media accounts will help the town thrive economically.

As the accounts continue to grow, the group wants to encourage chatter within the channels.

“There is now a forum that allows for there to be easy communication between the business owners, chefs and local community,” Russo said.