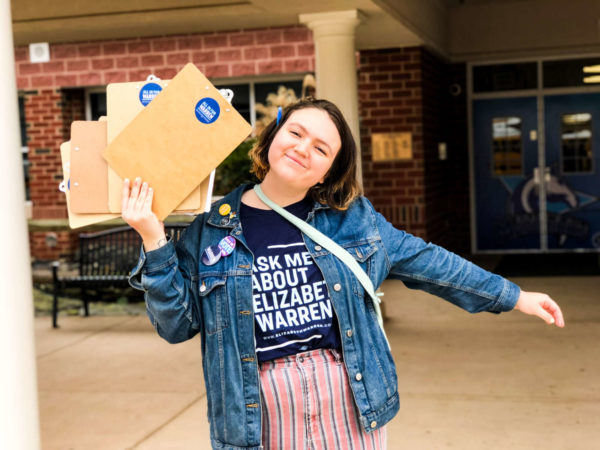 The Virginia headquarters for the presidential campaign office for Elizabeth Warren sits at 450 W. Broad Street in Falls Church.

Tysons Reporter reached out to Warren’s campaign and connected with Rylie Cooper, an organizer from the office, to hear her opinions on the campaign’s progress and base in Falls Church.

Below are Cooper’s answers to questions from Tysons Reporter.

Tysons Reporter: How many people are engaged with the Falls Church campaign office overall?

Cooper: We’ve had literally hundreds of volunteers come through our Falls Church office. On any given weekend, we launch canvasses with more than 30 people scheduled for each shift. One of my favorite events to launch out of this office was our Foreign Policy Professionals for Warren Canvass!

We had nearly 40 foreign policy professionals from all over the D.C. area ranging from professors and their students to foreign service members who organize themselves into a group and come together on a Sunday afternoon to knock on doors and talk to Virginia voters about Elizabeth and her plans to bring big, structural change to the Commonwealth.

TR: How have outreach efforts been going in the area?

Cooper: The enthusiasm on the ground for Elizabeth Warren and her message for big, structural change has been very well received both here in Northern Virginia and across the Commonwealth. This area was especially really active following the 2016 election.

The people here are incredibly excited about the opportunity to elect a woman who represents their values. There was a significant organic and grassroots movement for Elizabeth Warren in place even before any of our staff even hit the ground. This is the same group who helped elect the most diverse state legislature in Virginia in 2017 and take it back for Democrats in 2019 and now they’re activating their networks for Elizabeth.

TR: What are the borders of the outreach area?

Cooper: Our campaign is organizing everywhere. In addition to the Falls Church office, we have an office that focuses on Hampton Roads/Virginia Beach area and we have grassroots hubs in Central Virginia.

TR: What have been some successes?

Cooper: I think our biggest success has been training our volunteers and empowering them with the tools they need to do this work on their own time, in their own communities and in the way that feels most impactful to them. We have nearly 1,000 people who have raised their hands to volunteer in over 100 cities, towns and counties across the commonwealth — including in every single congressional district.

We’ve knocked on nearly 75,000 doors and made over 43,000 calls since Jan. 1. We’ve had over 150 volunteer phone banks and canvass and over 700 one-on-one conversations with people wanting to get involved with the campaign. People are also really happy to be connected with other Elizabeth Warren supporters in their communities.

TR: Are there full-time staffers at this office? Are they paid? Volunteers?

Cooper: We have several full-time staffers — all the staffers are paid. We also have several volunteers who come in to help around the office when they can. We’ve trained more than 100 volunteers. They come to our office when it makes sense, but they also organize out of their own garages and homes and with their neighbors.

TR: How are the outreach efforts different in the NoVA area compared to other places in the country?

Cooper: Our campaign has been organizing in traditionally red and blue areas of states who will be voting in the next few weeks. Here in Virginia, we are reaching as many communities as we can across the state and that is how we are organizing across the country too.

TR: As a team leader what are your responsibilities?

Cooper: My responsibilities range from training and managing our organizers to preaching Elizabeth’s message to every single person I meet to working with our leadership team to make sure we have a happy and productive work environment to making sure our volunteers have a great experience every single time they volunteer.

TR: Has Warren visited the HQ or does she plan to make a stop anytime soon in the area?

Cooper: She was in Arlington last Thursday for a town hall! It was so amazing to see people come from all over the D.C. area ready to get involved for that last final push leading up to Super Tuesday!

I just wish everyone could see her in a town hall like we did. It’s reassuring to know that a lot of the people who were able to witness the magic of an Elizabeth Warren Town Hall are now signed up to help us talk to Virginians all over the commonwealth and share that energy of the Arlington town hall with voters at the doors and on the phones.

The interview has been lightly condensed and edited for clarity.