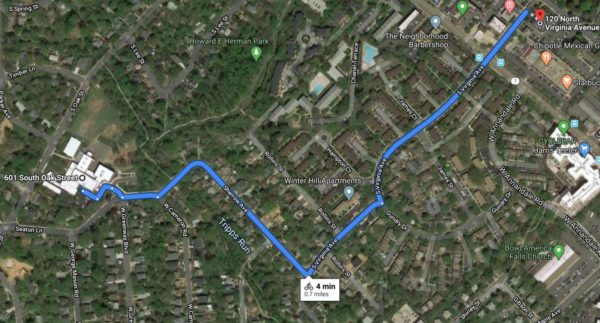 As construction kicks off on renovating the Mary Riley Styles Public Library, the library will temporarily move to trailers near Thomas Jefferson Elementary School.

The library (120 N. Virginia Avenue) is set to close on Monday (Feb. 17), according to a press release from the city. The temporary library is set to reopen in mid-March at trailers at 601 S. Oak Street.

According to the press release, the temporary library will be open:

“Visitors may park on the street while minding the posted street signs,” the press release says. “Visitors should be mindful of the surrounding neighborhood and respect private property.”

The temporary location will host a good selection of books, periodicals, and other media. Programming like book discussion groups, ESL Conversation Groups, and storytime will continue, with some changes; visitors should check the library’s website for exact details.

All due dates for books and other media are extended into March. Once the temporary location opens, books may only be returned there (601. S. Oak Street). No books or media may be returned at the N. Virginia location, including the drive-through book drop, after Friday, February 28.

The Falls Church City Council approved the construction contract for the project on Monday (Feb. 10).

The renovation is set to revamp the aging library, move the Local History Room and improve safety. The project is scheduled to be completed by May 2021, according to the press release.