As WMATA looks ahead to summer Metro repairs, more details have been revealed about the Orange Line closures that will impact riders in Northern Virginia.

Beginning May 27, the Vienna, Dunn Loring and East Falls Church stations will be closed, according to a WMATA presentation at a Falls Church City Council meeting earlier this week, which added that the Silver Line from McLean to Wiehle-Reston East will also be affected. 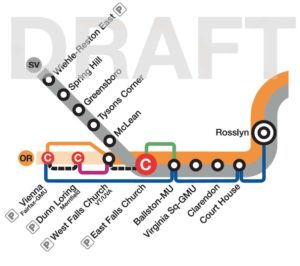 WMATA representatives also said free buses will replace trains at each of the affected stations and riders can expect the closures to last through Sept. 7.

Summer was chosen as the ideal time for the project because ridership is down slightly during that time of the year, the representatives said.

“We found it was really much more efficient when we use longer extended periods (of closures),” one representative added, compared to completing updates at night or over weekends.

The presentation also mentioned that Silver Line trains from McLean to Wiehle-Reston will stop at each station but run on a reduced schedule.

There will also be a variety of Metro Buses, ART Buses and Fairfax Connector Buses that will also be affected, according to the presentation.

Image (2) via City of Falls Church