Fairfax County wants to give commuters another way to access the McLean Metro station in Tysons.

The Fairfax County Board of Supervisors is set to vote on a funding application that seeks to add a new entrance to the Metro stop.

The county is looking for $1 million to add a new entrance on the north side of the station to make it easier for pedestrians coming from Scotts Crossing Road and the Capital One campus. 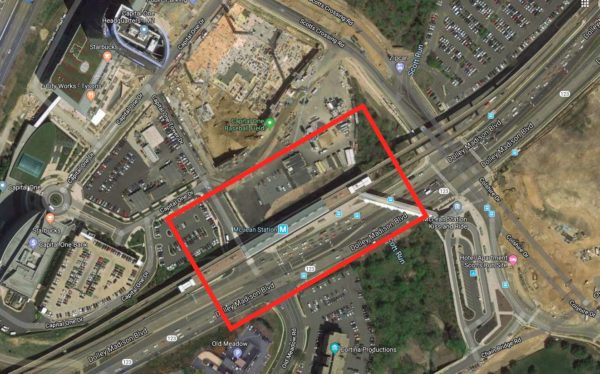 “The increase in the number of residential dwelling units in the area presents an opportunity to capture commuters that would otherwise drive single-occupancy vehicles on the Dulles Connector Road and 1-66 Inside the Beltway in efforts to reach Arlington and downtown D.C,” according to county documents.

Ridership at the McLean Metro station has continued to rise, according to stats from the Northern Virginia Transportation Commission (NVTC).

Compared to the four stations in Tysons, the McLean station saw the largest spike in ridership from April-June, rising 25% over the last year, followed by the Greensboro Metro station at 18%.

Ridership at the McLean station has now gone up dramatically for 3 quarters in a row: first by 18.6%, then 20.6% and now 25%.
Kudos to @CapitalOne & @MITREcorp #sustainability #transit #TOD #greencommute

The Metro entrance proposal is one of three project submissions to NVTC that the board is set to consider endorsing tomorrow (Tuesday) for the Fiscal Year 2021-2022 I-66 Inside the Beltway Commuter Choice Program.

The two other proposed projects include:

In total, Fairfax County is requesting roughly 10 million from NVTC. County staff recommends that the McLean Metro station project be the top priority, according to county documents.