Metro ridership might be plummeting overall, but ridership in the Tysons area is continuing to increase.

All four stations in the Tysons area saw increased ridership in the spring of 2019 as compared to the year before, continuing an upward trend this year.

The Northern Virginia Transportation Commission’s new stats compared ridership in April, May and June of 2019 with the same period in 2018. 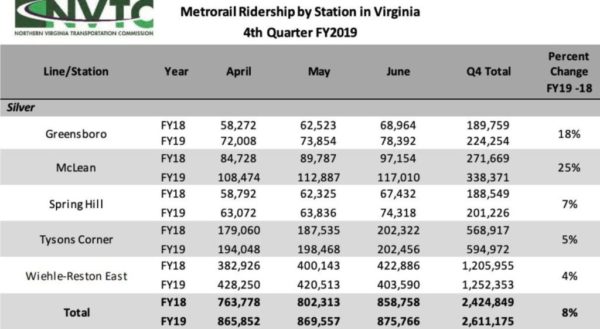 Ridership at the McLean Metro station by the new Capital One headquarters has continued to spike. Out of the four, the McLean station saw the largest increase in ridership during the three-month period, rising 25% over the last year.

On the other side of Tysons, the Greensboro Metro station spiked to 18%.

“Ridership at the McLean station has now gone up dramatically for three quarters in a row: first by 18.6%, then 20.6% and now 25%,” Tysons Partnership tweeted, thanking Capital One and The MITRE Corporation.

As for Greensboro, the partnership pointed to Meridian Group’s The Boro development.

“Ridership at the Greensboro station has now gone up dramatically for two quarters in a row: first by 18.4% and now by 18%,” Tysons Partnership tweeted.